Say what you want about the movies, but at least the actors know how to make a memorable entrance.

Tanks at Cannes – if anyone could pull it off, it had to be Sly Stallone and company. Stallone and Expendables 3 costars made their arrival, riding along the Croisette in the French city in two massive Soviet tanks. Sure, it didn’t do anything to help the already terrible traffic in Cannes around festival time, but it did contribute to the film’s eye-popping promotional bill of $2 million, spent over the course of the festival. 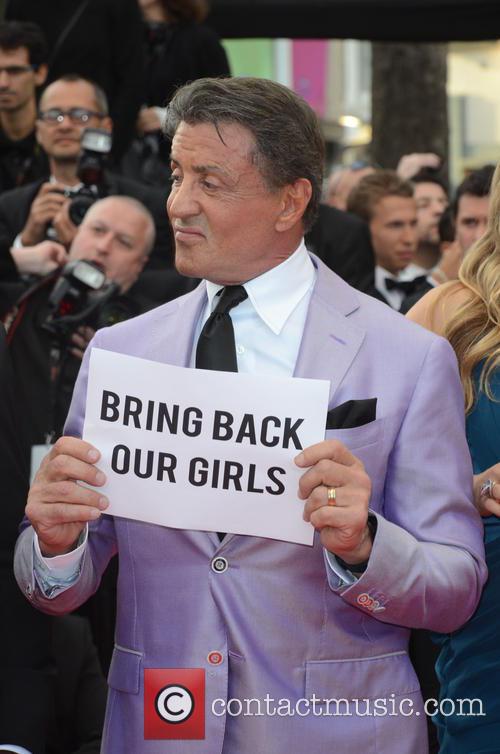 Sylvester Stallone shows his support for the efforts to rescue over 200 girls kidnapped by militants in Nigeria.

Besides the tank stunt, admittedly one of the better ideas to come out of a Hollywood promo team, the $2 million budget also included a promo of clips from the movie and a star-studded press conference at the Carlton hotel. The press conference featured almost all the stars of the film (and the tank stunt) including returning heroes Sylvester Stallone, Jason Statham, Arnold Schwarzenegger and Dolph Lundgren, as well as new recruits Harrison Ford, Mel Gibson and Kelsey Grammar. Nu Image and Millenium Films must be working on a very liberal budget this time around.

Watch the Expendables 3 trailer below.

A producer in the showreel declared the lineup "the best cast assembled for any film ever", while Gibson spoke of a "pile of icons", according to The Guardian. Director Patrick Hughes explained that the cast took much pride in doing as many of their own stunts as possible, despite their advancing years, with Stallone adding: "We put the pain in and it pays off."

Expendables 3 is out on August 15 in the US.

More: In Defense Of Bruce Willis. Why $4 Million For The Expendables 3 Is A Bargain.