Sylvester Stallone Has Shown His Support For Puerto Rican Boxer Miguel Cotto Ahead Of His Big Fight With Rival Canelo Alvarez By Visiting The World Middleweight Champ During Training. 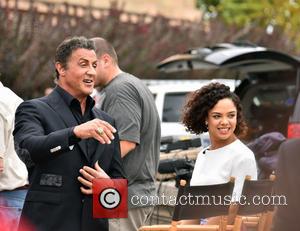 Picture: Sylvester Stallone , Tessa Thompson - The cast of 'Creed' at a press conference on the steps of the Philadelphia Museum of Art at Philadelphia...

The Rocky star made a trip to the Wild Card gym in Los Angeles last weekend (31Oct-01Nov15 ), where Cotto is currently in training ahead of his hotly-anticipated bout with Alvarez later this month (Nov15).

Stallone, who was accompanied by his daughter Sophia, wandered around the fitness facility chatting with other boxers, and watched intently as Cotto traded blows with a sparring partner.

The Hollywood legend praised Cotto's moves in the ring and even joked he could have a role in Stallone's most famous film franchise, saying, "He fights. He fights. Some people box, some people dance. He fights, so... I gotta have him in a movie. He could be the real Rocky."

Cotto and Mexican boxer Alvarez are due to meet in the ring at the Mandalay Bay Resort in Las Vegas on 21 November (15).