Scroll for pictures from the premiere 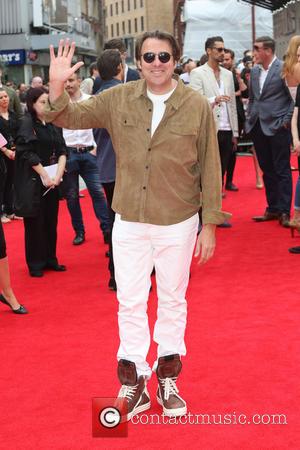 The sun beamed down on a range of A-Z-list celebs last night (August 4) as The Expendables 3 enjoyed its world premiere in London.

As well as the film’s stars, like Sylvester Stallone, Jason Statham, Wesley Snipes, Antonio Banderas and Kellan Lutz, a bunch of celebs trampled the red carpet ahead of the film's world premiere including Jonathan Ross, who made some seriously questionable fashion choices.

The all-out action film, currently enjoying a third outing, sees many of Hollywood’s favorite stars combine. At 68, you would think Stallone is coming to end of his stunt career. He, on the other hand, has different ideas.

"Through Rambo and The Expendables, I break my neck and my spine and I dislocate both shoulders. In this one here, I end up really taking a fall on my back and had some metal put in there, so if you hear any squeaking, it's not my shoes but my back. But I'm getting better,” he explained.

Stallone, who was with his daughters at the premiere - Sophia, 17, Sistine, 16, and Scarlet, 12 – explained that a female version of The Expendables, entitles The Expendabelles, is on the cards. “With Expendabelles you’ve got a situation where we’re in unchartered waters to put all women together and think will that really work? We don’t just want to use the name – it needs to be something that can hold its own,” he explained, before producer Avi Lerner stepped in to stop him saying too much.

More: 'The Expendabelles' Is Really Happening