They could have been called 'Meet You At The Lions', 'See You At The Trip' or 'Catch Up At The Broadway' but as night follows day for some, music followed swimming for the band members who developed their ideas after a splash down at Viccy Baths! Nottingham quintet Swimming have been around now since 2005 and have already released a debut album, 'The Fireflow Trade'.

Although plugged in their home town, and given air play by the likes of Huw Stephen's among others, Swimming remain relatively unknown outside of their East Midlands stomping ground. Their new single 'Sun In The Island' coupled with a 'Pre Flight Mix' of 'Team Jet Stream' hopes to raise their profile and bring their "Vintage synth and textured beats" to the masses. They claim that "They write and play songs and sounds for the heart and mind" which may be all very well for a slightly pompous balladeer, however Swimming are more about upbeat infectious electro synth driven pop with a cheeky kitsch veneer. It's all 'China Crisis in 'Toto' saying 'Wang Chung' to 'Men Without Hats', and in the case of both the A and B-sides, extremely catchy and very radio friendly.


John, Peter, Blake, a.k.a Ginger Coco (He's a visual artist, you'd have to ask him) Andrew and Jonathon make up the Swimming team. Their blend of polished electro guitar enhanced pop may pull from an altogether different era but it is no less effective for it. The tight rhythm section is complimented and contrasted by the charged guitars, skipping keys and John's falsetto vocals to produce a very polished single.

Get your costumes ready, it's Swimming time. 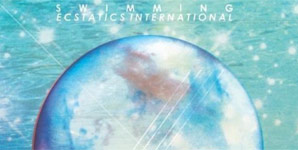 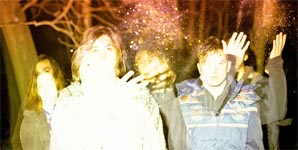 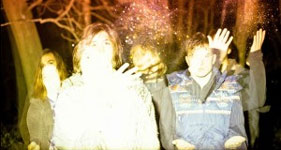 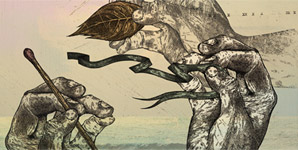