Scottish Singer Susan Boyle Has Called In Police Over A Phantom Caller Who Is Uttering Obscenities To Her On The Phone. 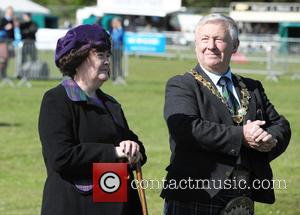 Picture: Susan Boyle and West Lothian Provost Tom Kerr - Susan was Chieftain in 2014 and handed over the Chieftan's Cromach (a shepherd's crook) to 2015...

The I Dreamed a Dream hitmaker, who found fame on U.K. TV show Britain's Got Talent in 2009, has admitted she is living in fear after the terrifying calls began on Saturday (20Jun15).

Boyle called in cops to deal with the matter after the caller allegedly made threats, uttered obscenities and cursed at her.

She tells Britain's The Sun newspaper, "I'm really worried. I haven't slept much since they started. I have no idea who it is or why they called me. The police were very reassuring but deep down I'm really worried. Something must be done to stop this guy."

Police officials have confirmed they are investigating the claims.