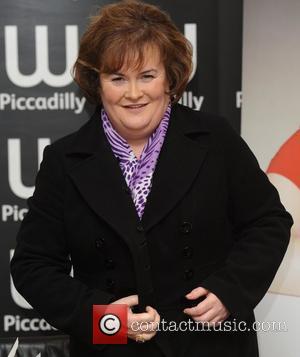 Picture: Susan Boyle signs copies of her autobiography 'The Woman I Was Born to Be' at Waterstone's Piccadilly London, England - 16.10.10

Susan Boyle recently spoke of how she was hurt by Lou Reed's refusal to let her cover his track 'Perfect Day' on an episode of America's Got Talent, but in a dramatic U-turn the former Velvet Underground front-man has been involved in the production of the singer's new video.
68-year-old Reed took up a creative role during the production of Boyle's video for the song that he initially banned her from covering, reports the Scottish Sunday Mail. The video was shot on the banks of Loch Lomond, and Reed told the newspaper, "I wanted to create a beautiful and intimate piece shot in Susan's native Scotland and she quickly agreed". Speaking about the collaboration, Boyle said, "I loved that Lou understood how much it meant to me to film in Scotland. I didn't mind how much it rained or blew a gale - I enjoyed every minute".
Speaking to Piers Morgan on his show 'Life Stories' which aired on Saturday (6th November 2010), Boyle described Reed as being 'childish' for refusing to let her cover his song, however, it has been reported that the interview was recorded before Reed became involved in the project. Boyle's second album 'The Gift' is released today (8th November 2010).