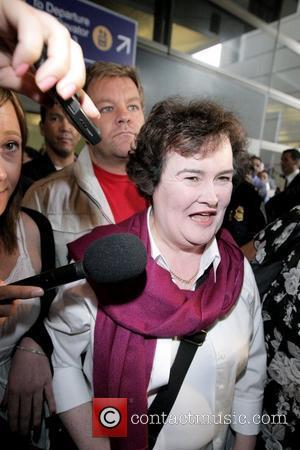 Picture: Susan Boyle arrives at LAX airport on a British Airways flight from Heathrow and is mobbed by photographers, reporters and fans. Los Angeles, California...

Talent contest sensation Susan Boyle is going down a storm in the U.S. - her performance on the finale of AMERICA'S GOT TALENT pulled in a staggering 25 million viewers.
The spinster shot to fame after wowing the world with her rendition of I Dreamed A Dream from Les Miserables on the U.K. version of the talent search earlier this year (09).
She has since been recording her debut album, which has already topped the bestsellers list on website Amazon - months ahead of its release.
And things won't to be slowing down for the 48 year old Scot - her performance of new single Wild Horses on the show on Wednesday night (16Sep09) pulled in viewers in their droves - as well as a standing ovation from the studio audience.
Even the judges, tough-speaking Brit Piers Morgan and rock matriarch Sharon Osbourne, jumped to their feet after Boyle finished her rendition of the Rolling Stones' classic.
An audience member tells Britain's Daily Mail newspaper, "People were crying and cheering her after her performance."