Review of Supersonic Festival 2011 which took place at the Custard Factory, Birmingham on 21st - 23rd October 2011

Supersonic Festival offers a rare treat for an annualized festival; an event which is ever-changing and ever-unpredictable. Its ninth addition saw a further rejig of the festivals layout, adding a second stage accessible via a bridge lit by a menacing green light and further making use of the uncompromising layout of the site, a host to several art installations and a general hub of the second city's creative community. 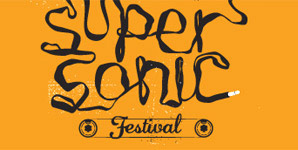 Fittingly, for Supersonic the onus is on bands who have a similar spirit of creativity. Metal and Electronica, typically seen as the two pillars of the festival whether rightly or wrongly, are certainly two genres chock full of soundalikes and carbon copies, but it is a credit to the festivals organisers, the Birmingham based Capsule team, that barely any are to be found across the three days of 2011's edition.

The weekend's most eclectic band are also its openers. The mysterious a.P.A.t.T conjure up an irresistible and downright insane blend of...well, just about anything you can think off. They start off with 'Elegy For Count In', a reasonably straightforward take on the digital math-rock of Battles, but they soon stretch out much further, incorporating disco-funk vibes, sludge-metal riffs, barbershop harmonies and (almost) everything in between, often within the confines of the same song. More impressively, like fellow Supersonic performers Chrome Hoof and Japanese grand-masters Mutyumu they do it seamlessly, never sounding cluttered or losing their way.

They're the best possible introduction to any festival and, for an hour at least, distract from the bitter cold that has already taken hold of the site. Despite making for visually pleasing settings the previously abandoned warehouses that host the festival's two main stages do nothing to keep out the freezing winds. They also provide an occasional struggle for sound balances. Whilst a.P.A.t.T are afforded a perfect level for their sonic explorations, Part Chimp sound far too quiet and muddy to make their typical impression, and complementary to this their stage presence is one of disinterest, with lead vocalist and guitarist Tim Cedar's regular guitar-string breaking the only indicator of the pent-up rage usually associated with the band.

It is something that later affects Electric Wizard and Bardo Pond on the Space 2 stage, but across the bridge on the Boxxed stage there is no such problem. DJ Scotch Egg's mix of breakcore, gabba and chiptune is positively shattering, with each bass sample pounding just above the stomach. Shigeru Ishihara, the man behind the egg, has broaden his palette beyond Gameboy gimmickry, and has become a genuinely fascinating live prospect, both solo and part of his side project Drum Eyes, a supergroup of sorts also featuring a former member of The Boredoms whose set of trembling percussion-led post-rock is a highlight on the same stage on Sunday.

Granted, not all of the highlights are musical. Although not attached to the festival the exotic and well-priced curries of the 'Bay Leaf' Bangladeshi restaurant are perfect before a long cold night subjecting yourself to decibels above the 100 mark and drinks above the 10% mark, with the Chicken Bhuna (accompanied with probably the best keema naan this particular scribe has tasted) a recommendation. Alongside this, the Bar 78 sports pub offers a solid breakfast and, if you happen to support a particular side based Manchester, an altogether different type.

But it is a music festival after all, and there is plenty to keep the interest throughout the weekend. Headliners Electric Wizard and Sweden's Skull Defects pummel late on the Saturday night, with the legendary stoner quartet offering face-melting riffs aplenty and Gothenburg's finest giving a wide-and-wild-eyed take on QOTSA's driving desert-rock. 'Peer Amid' showcases the band at their unrelenting best, using the added percussion of water barrels pushed through effects pedals to emphasise their point. At times they approach the grounds of The Horrors, at others Can at their more visceral, but any comparisons are an afterthought.

There are plenty of moments to reflect, too. Nathan Bell's rustic Americana is almost completely inhabited by the scenic spirit of Ennio Morricone and it is perfect for the Old Library stage, and he takes 'drawn-out' country as far as it can go, playing harmonica, banjo and drums, often at the same time.

Unfortunately, due to scheduling and work commitments, Contactmusic.com misses the Sunday evening of the festival, therefore missing some of the main attractions of the weekend including Envy, Silver Apples, Byetone and Turbonegro. Fortunately there is more than enough prior to this to make it more than worth the trip. Supersonic is widely regarding as one of the greatest top-to-bottom festival's in Britain, and the 2011 edition has a claim for being its strongest edition. Until next year. 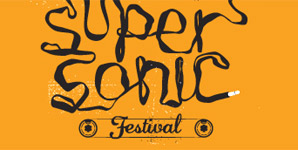