Sun Airway offer up their second album in the form of 'Soft Fall.' The Philly-based duo released their debut 'Nocturne of Exploded Crystal Chandelier' back in 2010. 'Soft Fall' is a healthy dose of electro-pop goodness embedded within a sweeping atmosphere, cocooned in a hazy mist. If a slideshow of pictures had to accompany the album, each image would be a picturesque postcard snap of a luxurious setting with rich colours, brimming with nature. Autumn leaves, squirrels or even a sunny beach with pensioners eating chips in the background would do the job nicely. 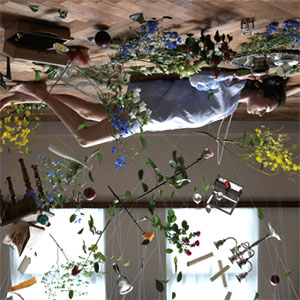 'Soft Fall' has an intro and two interludes called 'Activity 1', 'Activity 2' and 'Activity 3'. These are quite trendy at the moment, seen recently by Alt-J, The Maccabees and The XX. Frankly, interludes can be seen in two lights: 1) Well, that band are a bit lazy, did they run out of studio time or couldn't they be bothered to integrate any lyrics for that one?, or 2) Oh, an instrumental track among the others gives you time to reflect on the other tracks, instead of being hit with song after song after song. The latter is the correct definition for Sun Airway. The 'Activities' contain a lush array of expressive sounds, some glitchy and some that may put you into a meditative state. Mind-bending.

Previous single 'Close' flourishes within its bright textures, which lend themselves to cheer up Jon Barthmus' sometimes dreary vocal. Lyrics "And say you've never known love like this before, I say I've never known loneliness like this" bare a subtle resemblance in execution to Edwyn Collins' 'Girl Like You.' The vocal tone over the electro stints gives a nod to the modern works of The Killers and M83.

A couple of the tracks seem to contain similar components, making it difficult to properly differentiate between tracks during the first few listens. 'Wild Palms' and 'New Movements' find themselves bewildered in this category. The duo consists of two members from former indie act The A-Sides. 'Black Noise' and 'Symphony in White, No.2' delve back to this band era slightly; they contain the most ambition and sound as if they're heading in a purposeful direction with the concentrated beat. The foggy electro-pop gets edgier. MORE OF THIS PLEASE!

Sun Airway have produced something respectable. But they should have consulted their timeline and injected a bit more rock 'n' roll into this album for it to stand apart from their debut and give it more of a 'wow' factor.