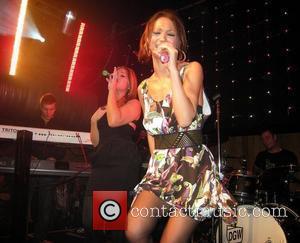 Sugababes star Amelle Berrabah had a run-in with the law after her pal was arrested for drink driving in London while the pair was enjoying a boozy night out on Tuesday (06Jan08).
The singer and Russian fashion designer friend Nicole Sconciaforni left a party at the British capital's Mahiki nightclub to smoke a cigarette.
Not wanting to stand in the freezing winter temperatures, the pair retreated to Sconciaforni's nearby Porsche to stay warm - bringing with them their cocktails.
But police were forced to act when they spotted the car reversing down a central London road.
Authorities tested the designer for alcohol intake and subsequently arrested her for driving under the influence.
A London police spokesperson confirms a 28-year-old was arrested on suspicion of driving drunk, driving while disqualified and driving with no insurance. She has been bailed to appear in court on 19 January (09).
But Berrabah refused to let the incident ruin her night - she returned to the club and partied for another hour and a half.
It's not the first time Berrabah has hit the headlines because of the illegal-activities of those close to her - last September (08) she was left red-faced after her nurse sister was sentenced to community service after pleading guilty to stealing cards and cash from patients.