By David Straw in Music Reviews on 18 September 2012 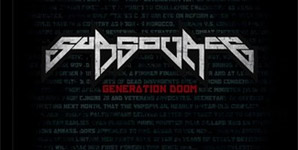 Liam Howlett of The Prodigy loves them, Ragga-Metal heavyweights Skindred have been using their mix of Slipknot's Duality on tour and a legion of fans have been converted by their high-energy live shows. Subsource exhibit all the attributes of a band set for a huge breakthrough, a step up into the mainstream consciousness. Their sound, however, is not revolutionary; 'Meat & Potatoes Electro-Metal' if you would. The band's straight up approach is brave in a time when rock/electronic crossovers are reasonably commonplace. Their Generation Doom EP is not brimming with original ideas, but it does offer an exciting approach to a well-oiled formula. The first seconds of Generation Doom grab you by the scruff of the neck before offering a twenty-five minute sonic punch to the solar plexus. Opener Molotov screams blue murder, a sonic call to arms with power and swagger in abundance. Second track The Feeding increases the momentum even further, breaking into an arena-sized chorus and climaxing with a heavy blend of guitars and synth that threatens to explode. It's All A Lie sets off with a killer riff, before settling into a comfortable mid-tempo groove; while possibly the least original track on the EP, the strong ending provides one of the EP's most exhilarating moments . Anarchy is everything its name suggests, a jagged and angular four minutes underpinned by some impressive drumming that threatens to incite a riot. Closing track Kill The Thief is dangerously heavy, far more reminiscent of the recent Korn collaboration (The Path Of Totality) than their more mainstream rivals. The silence that follows the end of the EP feels empty, a gaping chasm that can only filled by pressing play again. Combining heavy riffs with some inventive dubstep elements, comparisons with the likes of Pendulum, Modestep and, at times, The Prodigy are impossible to avoid. If Pendulum considered themselves to be an Electronic AC/DC, Subsource have twisted that notion becoming much faster, heavier and darker than their peers. This darkness and aggression is evident throughout the Generation Doom EP. It's also important to note that this EP sounds huge. The slick production sees the choruses soar and heavier moments roar through the speakers. In a genre where production can make or break a record, it's pleasing to hear something that sounds as good as this. This EP is by no means the finished article as far as Subsource are concerned; time will tell whether their sound will mature with age and offer something entirely unique but Generation Doom is certainly a statement of intent. Touches of brilliance sprinkled across the six tracks suggest that their creativity will blossom and if they continue to develop at this rate, they'll be troubling arenas alongside their peers in no time. David Straw

Subsource are a London band that have uses UK influences like punk, dub step and d&b to create a hard hitting live band able to rock crowds and create a lively energy. Certainly the influences of Prodigy, Pendulum and even Rage Against The Machine have inspired this band and 'Tales From The Doombox' is out there to push and provoke the youth. 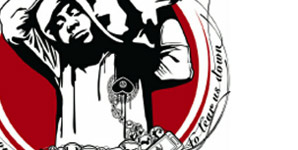