Styx co-founder Chuck Panozzo has refused to give up his touring duties as he battles Aids, insisting performing with his pals has helped his recovery.

The bassist was declared HIV-positive in 1991, but he claims he is feeling better than ever after fighting the life-threatening illness for more than two decades - and a secret battle with prostate cancer.

He tells Indiana newspaper Journal and Courier, "I had full on Aids about 10 years ago, I took off work and (bandmate) Tommy (Shaw, singer) said, 'I'm afraid I will never see you alive again.' It was that serious. It was horrible drugs, but you take them because otherwise you will die, you have no choice...

"I'm a lot better now though. My T-cells (white blood cells) are up and I keep up with my prescription. I can't complain. I had prostate cancer after that and I'm sure one day I'll have (a) hip replacement. You have to have goals and faith in yourself. Whatever you have you have to deal with it, to the end, the best you can... It's part of what I have to do, but I still don't want it to interfere (with my life). There may be days when I don't feel 100 per cent or am tired, but who isn't tired that day?"

And Panozzo, who made a guest appearance at the group's autumn tour stop in Wabash last week (12Oct12), admits he loves joining his bandmates onstage whenever he can - even if it's just for a couple shows.

He adds, "What the band has taught me psychologically is that I need to go out and be with my band as they continue their legacy in the rock 'n' roll world forever. How could that not help me in my recovery process? I have a band that is willing to make sure that I stay healthy." 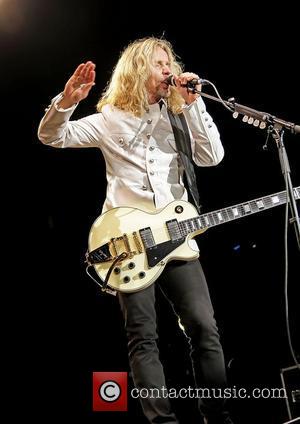