Still Flyin's new single, Travellin' Man, was released on March 26th. It is the lead single from their second studio album, On A Bedroom Wall, which will be released on May 21st, through Highline Records.

The video for Travellin' Man was directed by Chris Rogers and uses footage from Still Flyin's last European tour in 2010. We see frontman Sean Rawls in a lot of similar looking airports and exploring various European cities.

Still Flyin' has a range of musicians within the band, including Isobel Knowles (Architecture in Helsinki); Mark Monnone (Lucksmiths); Josephine Olausson (Love is All); Gary Olson (Ladybug Transistor) and Yoshi Nakamoto (Aisler Set). Still Flyin' was conceived in 2004 and can be called a supergroup. Sean himself has had experience in other bands, including Je Suis France and Masters of the Hemisphere. After releasing a string of EPs, Still Flyin' released their debut album, Never Gonna Touch The Ground, in 2009.

Still Flyin', as well as citing bands such as Talking Heads and Kraftwerk, have credited the actor Matthew McConaughey as an influence. 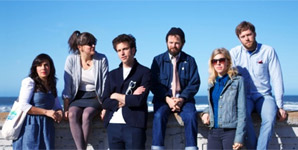