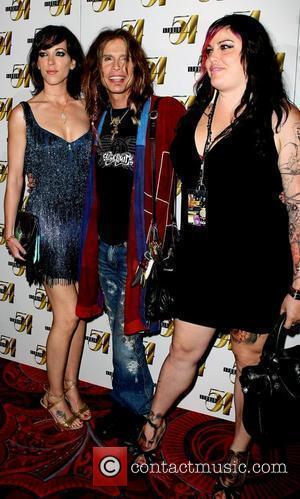 Steven Tyler has quit Aerosmith, according to the band's guitarist Joe Perry.
It comes just months after the singer spoke out publicly to dismiss reports the band was on the verge of splitting following a year of cancelled tour dates, injuries and accidents.
In August (09), Tyler broke his shoulder after falling off stage while performing in South Dakota, and the group was forced to scrap the remainder of its summer tour.
Perry admitted that following the accident he and Tyler didn't speak for more than a month, prompting rumours the band's future was in jeopardy.
And it seems fans' fears were justified - guitarist Perry has revealed his pal has left the rock group after its performance as part of the Formula One racing season's final weekend in Abu Dhabi last weekend (01Nov09).
He tells the Las Vegas Sun, "Steven quit as far as I can tell. I don't know any more than you do about it. I got off the plane two nights ago. I saw online that Steven said that he was going to leave the band. I don't know for how long, indefinitely or whatever. Other than that, I don't know."
Perry claims the discord in the band is down to Tyler's lack of communication, including his failure to return phone calls: "He's notorious for that. That's one thing I've learned to live with. I try to overlook it. I like to pick my battles.
"Frankly, the last few months I've been wanting not to rock the boat. I don't want him cancelling any more gigs. We really wanted to do these last four. We just kind of didn't want to call him out or anything and get him anymore p**sed off, for whatever reason. So we just let things lie. So we did the gigs and, like I said, I got off the plane and saw this online. That's how I know about it... He has had no contact with me or the other band members."
But Perry is determined to continue with Aerosmith, even if Tyler refuses to return.
He adds, "Right now I'm adjusting to how we're going to go on. Aerosmith is such a powerful band, I mean it's like a steam locomotive. You just can't disregard 40 years of four guys who play together as well as they do. We're just trying to - at least I am - trying to figure out what direction the band should take.
"As far as replacing Steve, it's not just about that, it's also four guys that play extremely well together, and I'm not going to see that go to waste. I really don't know what path it's going to take at this point, but we'll probably find somebody else that will sing in those spots where we need a singer and then we'll be able to move the Aerosmith up a notch, move the vibe up a notch."