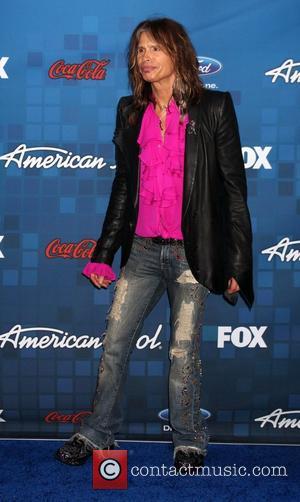 Steven Tyler has reportedly buried the hatchet with long-time song-writing partner Joe Perry and hinted that the pair would begin writing together in the summer.
Steven Tyler, the American rocker and current judge on American Idol has given the clearest indication yet that Aerosmith will record a new album.Speaking on his Twitter page, Tyler referred to his tumultuous relationship with Perry, saying, "Joe & I Sent Smoke Signals... Shot The S*** & Chewed The Fat For The Last Year... But Just Smoked The Peace Pipe", he then added, "On Our Way To Rock'In Your Fkin Worlds This Summer By Locking Our Selves Away Somewhere W/ Guitars & Drums...Luvst". The veteran rockers released their last studio album 'Honkin on Bobo' back in 2004. The blues-based record was produced by Jack Douglas and reached number five on the Us Billboard 200 chart. It was recently reported that sales of the band's 'Greatest Hits' collections have increased by 250 per cent since Tyler began judging the singing hopefuls on American Idol.
Steven Tyler is joined by Jennifer Lopez and Randy Jackson on the expert panel for the hit reality show. The trio rounded the field down to ten finalists last week and the contestants will now perform in front of a live studio audience.