Embarrassment On Today As Steven Tyler Drops The F-Bomb 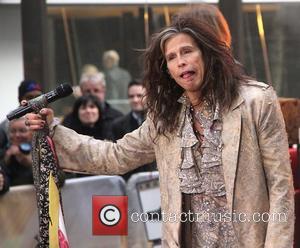 Steven Tyler might've spent the last couple of years slouched on a chair at the judging table of American Idol, but the Aerosmith front man hasn't lost his rock and roll attitude! If rock and roll means cussing early morning on American television anyway.

Tyler and his band were performing during the show's 8 o'clock hour, a pretty early time to be out of bed for normal people, never mind veteran rock stars, specially not ones planning to drop the F-bomb live on television. The moment came when Al Roker was giving the weather update, at which point Tyler revved up the early morning crowd who'd turned up for their first song by saying "Hey y'all...Thanks for coming out, you crazy f**kers," which could be heard against the backdrop of a weather map.

"What did he just say?" Roker asked. "That's why they haven't done mornings." It wasn't the only gaff that Tyler made either: as the show opened up, he could be seen sing-songing "good morning, America!" in reference to Today's bitter rivals. Oops. An embarrassed Roker claimed "That's why they haven't done morning television! They don't even know what show they're on!" We get the sense that Tyler might've just been being a bit devilish.