Steven Spielberg Has Expressed An Unlikely Interest In Shooting A Romantic Comedy With Tom Hanks. 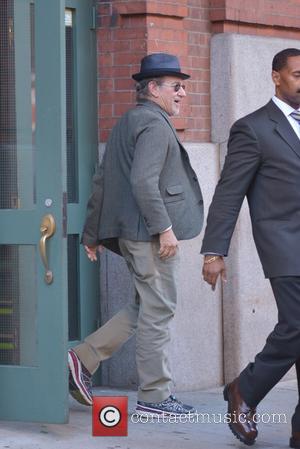 The frequent collaborators first teamed up for 1998's Saving Private Ryan and they are currently promoting their fourth project together, Cold War thriller Bridge of Spies.

However, Steven admits he would like to take a break from dramas and tackle a whole new film genre after branding Tom's 1993 classic Sleepless in Seattle one of the actor's "best" pieces of work to date.

"One of the films that I just think is one of the best things Tom has ever done, is Sleepless in Seattle," he told U.S. breakfast show Good Morning America. "I've never made a movie like that before; I would love to do a movie like that with this guy."

The pair's other movies include 2002's Catch Me If You Can and 2004 comedy/drama The Terminal.

The moviemaker admits working with Tom is always a delight because the actor is such a chameleon.

"For me, everything that Tom does is a surprise to me because I don't recognise him," he explained during a post-screening panel discussion at the New York Film Festival on Sunday (04Oct15). "I know Tom so well, but I don't recognise the character he plays... and I'm always amazed by that... It was kind of remarkable to see. It's been in every experience I've had with Tom, because each character he plays in all four movies that we did together is totally different."

And Hanks was equally as complimentary, crediting the director's style of filmmaking with allowing him to explore different aspects of his characters onscreen.

He joked, "Speaking on behalf of all the actors in the movie, you don't ever want to find yourself making your last Steven Spielberg movie. You know, you really want to please the man. Steven does this incredible thing when he casts you. He empowers you with the scene. He wants you to come in with ideas that are beyond the page, beyond the text, and even, I think, beyond the purview of your own character."