Speilberg Teams Up With Turlington And Burns For Fashion Series 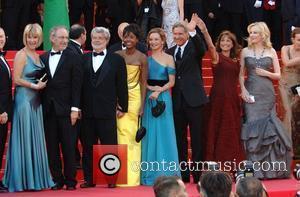 Oscar-winner Steven Spielberg is turning his attention to high fashion and developing a TV series with supermodel Christy Turlington and her husband, actor Ed Burns. The couple are attached to write a drama series set in the fashion world and based on an idea from Spielberg, who came up with the concept after attending New York's fashion week. The storyline will focus on five twentysomethings with fashion jobs such as photographer, designer, makeup artist and model. Spielberg specifically sought out Burns, who starred in his film Saving Private Ryan and Turlington, who are close friends of his, to handle the project. Executive producer JUSTIN FALVEY says, "There's a phenomenal partnership here in terms of this project. "Ed brings real character and a relatability to it, while (Turlington's) experience as a model is invaluable. She brings this expertise and insider's knowledge to it." Burns and Turlington will serve as executive producers on the show and if it is made into a pilot, Burns is also on board to direct.