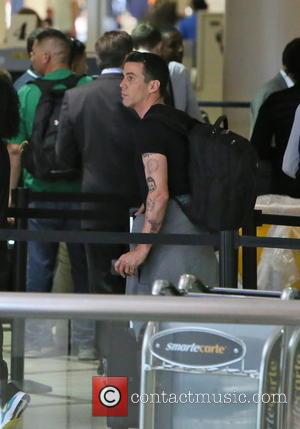 Tv prankster Steve-O is facing prosecution from Texas police after performing a dangerous backflip off a bridge in the city of San Antonio.

The former Jackass star, real name Stephen Glover, hurled himself off the San Antonio River Walk over the weekend (15-16Mar14), but claims he had no idea the water was only about four feet (1.22 metres) deep.

He shared a photo of the daring dive on his Facebook.com page, alongside the caption, "I did a good deed today by proving it's not safe to jump off the bridge at the San Antonio River Walk. It's shallow - I hit the bottom when I landed this gainer flip. #notagoodidea".

The illegal stunt, which was shot for a new YouTube.com show, has now landed Steve-O in trouble with local authorities, who are currently investigating the case "to determine the appropriate course of action", according to San Antonio Police Sergeant Javier Salazar.

City law forbids anyone jumping or swimming in the San Antonio River and the incident could cost Steve-O a $500 (£313) fine, but the funnyman, who shot the stunt for a new YouTube.com show, insists he was only trying to highlight the lack of bridge signs warning people how shallow the water is.

He tells Tmz.com, "They've given no indication that people shouldn't jump, and done nothing to warn anyone about the serious dangers of that shallow water. Very irresponsible, indeed."