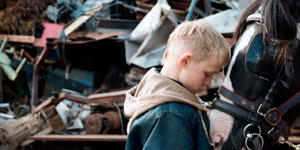 By Rich Cline
Excellent
Emily Bronte's novel is one of the most unsettling books you'll ever read, so it's about time a filmmaker made a darkly disturbing movie out of it. And Arnold's movie is like no other period adaptation we've ever seen: gritty, messy and thoroughly involving.

When the farmer Earnshaw (Hilton) brings a street urchin (Howson) home after a trip to Liverpool, he adopts him as a son and has him christened Heathcliff. He bonds quickly with Earnshaw's daughter Catherine (Beer), but her older brother Hindley (Shaw) continually abuses him. This only gets worse after Earnshaw's death, and when Cathy decides to marry the rich neighbour Linton (Northcote), Heathcliff runs away. Years later, he returns (now Howson) to confront Cathy (now Scodelario) about her true feelings.

The Earnshaw family live in the remote countryside of North Yorkshire. One day, Mr Earnshaw brings home a young gypsy boy named Heathcliff, who was found wandering the streets of Liverpool and announces that he is now part of the family.

Emily Bronte's novel is one of the most unsettling books you'll ever read, so it's...

The Earnshaw family live in the remote countryside of North Yorkshire. One day, Mr Earnshaw...

Pinkie Brown might be young but his reputation as a fierce and brutal criminal precedes...