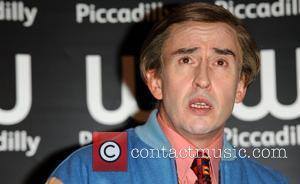 Funnyman Steve Coogan refused to fight to clear his name over allegations linking him to Owen Wilson's alleged suicide attempt because he was determined to shield his pal from publicity.
The two stars have become close friends and appeared onscreen together in Hollywood movies including Night at the Museum.
Following reports Wilson had been hospitalised after a suicide attempt in 2007, a British newspaper ran an article suggesting Coogan had some connection to the incident.
Now Coogan has spoken out to explain why he merely issued a "curt denial" of the story and didn't pursue legal action, insisting he did not want to make Wilson's situation worse.
Giving evidence at a public inquiry into the British media in London on Tuesday (22Nov11), Coogan told the hearing, "There is absolutely no truth in the allegation. I had not been on the same continent as Owen for nine months prior to this episode, and I've never taken drugs with him or in his presence...
"Primarily, I didn't want to give the story legs and my chief concern was my friend, at that time. I didn't want to shine a light on him when he was in that vulnerable state. I thought any emphatic courting of the press to protest my innocence, beyond that short, curt denial, would make life difficult for him."
The inquiry into press standards in the U.K. was sparked by the News of the World phone hacking scandal earlier this year (11), when the tabloid was shut down following allegations a private investigator working for the newspaper intercepted voicemail messages from cell phones belonging to crime victims.