Steve Carell has revealed during the 'Anchorman 2' première that the filming was difficult, due to Will Ferrell being too funny on the set. 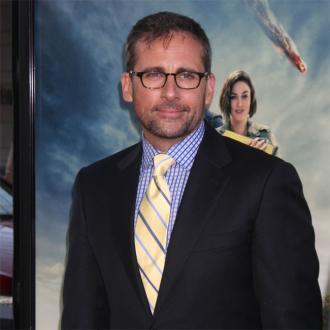 Actor Steve Carell had difficulty working on the 'Anchorman' sequel because he found Will Ferrell so funny it was ''almost impossible'' to work with him. The 51-year-old 'Despicable Me' actor apparently had no quarrels with immediately signing on for 'Anchorman 2: The Legend Continues', as the 2004 original was the "best fun" he's ever had. On the flip side, it made his job incredibly difficult, as he was almost unable to film certain scenes as he struggled to keep his composure.

In an interview with 'Bang Showbiz' at 'Anchorman 2''s premiere at The Odeon, Leicester Square, London, the 'Crazy, Stupid, Love.' star explained that: 'There's a scene we did in a lighthouse with Ron and it's probably the scene I laughed the hardest at. Will was so especially funny that day, it was almost impossible to get it [the scene] done.

Carell continued to explain that: ''It was the best fun I've had. None of us questioned going back to make this film.'' The film star also stated that it was his wife Nancy Walls, and children Elizabeth and John, that kept him grounded during filming and maintained that he stay down-to-earth.  ''My children have watched the original but they don't really think of me as an actor," Carell explained, "they just see me as Dad.''

The film's premiere on 11th December, 2013, saw other celebrities walking the red carpet, including Will Ferrell, Christina Applegate, Paul Rudd, Olly Murs, James Corden and the cast of 'Made in Chelsea'. Also in attendance was actor David Koechner, who called filming the sequel a ''remarkable experience.'' Koechner explained that: ''We just enjoy each other's company, I thought the script was amazing when I first read it. Every day getting to play with these guys and work, get back together, it was a truly remarkable experience. Will's an amazing guy, he's so super funny. These guys always write amazing comedy.''