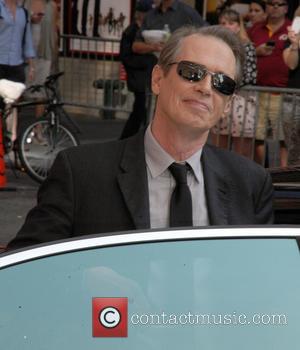 Picture: Steve Buscemi - Ahead of film ‘The Late Show with David Letterman’, celebrates were photographed arriving at the Ed Sullivan Theatre, where the show is...

Actor Steve Buscemi mocked New York City Mayor Bill de Blasio over his policies during a speech at an awards show in the Big Apple on Monday (10Nov14).

The Boardwalk Empire star received a prize at the Made in New York Awards for his contribution to the city's arts industry, and he was handed the trophy by De Blasio.

Buscemi took the opportunity to poke fun at the mayor and lambast his tough policies on motorists, joking that he had been due to film an appearance in a video round-up of the nominees, but missed his slot due to the low speed limits.

Buscemi said, "I was going there (to film) and I was driving 25 miles per hour and I was late," before adding "I was safe. And that's a good thing."