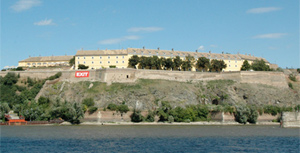 EXIT Festival has by far the best dance stage in the world and this year's line up just got even bigger. The EXIT electronic line up is hotting up with king of the beat David Guetta leading the charge, playing his distinctive sound and game-changing mega hits. Coming to Novi Sad straight from his Ibizan 'F*ck Me I'm Famous' residency David Guetta will be staging the mother of all parties combining different influences and some of the most recognizable house tunes ever. Bringing his live show to the Dance Arena, it will be an unforgettable night! If that isn't enough, three masters of house music Steve Angello, Mark Knight and Tom Staar will also be taking to the decks making this year's Dance Arena party one to remember. Adding this to the already announced Fatboy Slim, Dubfire, Eric Prydz, Jeff Mills, Pan-Pot, Apollonia and Seth Troxler to name a few, makes this summers EXIT Festival the place to be for electronic music lovers. Casting a spell on both performers and party goers, the legendary Dance Arena continues to attract like minded people from around the world to party hard and dance all night long!

David Guetta is the most famous DJ and producer in the world will be treating the audience with his super hyped-up set offering everything from pumping house beats to mind boggling electro and of course his chart topping tracks made with A list collaborators. David Guetta came a long way from Paris underground scene to magazine covers and red carpet events all thanks to his obsessive urge for constant improvement. Never ending DJ trips and production adventures with the likes of Kelly Rowland, Akon, Madonna, Snoop Dogg, Rihanna and many others made him globally recognizable dance music icon. Hit singles such as "When Love Takes Over", "Memories" and "Sweat" made thousands of hours of radio play worldwide and conquered clubs from Tokyo to Ibiza. With topping prestigious DJ Magazine Top 100 DJ list in 2011, winning two Grammys, MTV Europe Music awards and receiving numerous other recognitions it would seem that there is nothing much left to do for Mr. Guetta. In contrast to that all that is important to him seems to be making people happy: "It doesn't matter if I make a beat that's going to be a song on the radio, or if I make a record that's meant to please DJs, I always just think of making people dance-that's my first priority."

Another member of the house music elite, Steve Angello will make his EXIT performance a beginning of the new era in his career. Angello gained massive popularity, global superstar status and his Grammy nomination as part of the world's biggest dance super group, Swedish House Mafia, alongside Axwell and Sebastian Ingrosso. Now as SHM ceases to exist, Angello devotes himself to production and remixing work on his label, Size Records. Having made smashing hits with his friends Eric Prydz, Axwell and Ingrosso, Steve Angello also showed his ability to adapt to any music genre in remixing tunes from Justin Timberlake, Will.I.Am, Eurythmics, Pendulum, Moby and Deep Dish. Anthems such as "Save the World", "Antidote", "Greyhound" and "One", brought him fame and recognition as part of Swedish House Mafia while "Summer Noize", "Yeah" and "Raining Again" made his solo act rise to highest echelons of house music. Now he is coming to deliver a portion of his fresh style and enthusiasm to the roaring crowds of Dance Arena.

Charismatic Mark Knight has blessed the scene with more than his natural DJing and production talents, having gathered one of the most impressive flocks of electronic music performers on his Toolroom Records. David Guetta, Faithless, Florence + The Machine, Umek and Underworld are just some of the artists signed to his label. Just like Steve Angello, Knight has his Grammy nomination, but also three best sellers on Beatport and dance floor dominators such as "Downpipe", "Good Times" and "Devil Walking".

Tom Staar is the one to be heard of in the future. Dance Arena party people will dance until dawn breaks to the rhythm of Moda Records owner. His seductive beats will reverberate around fortress walls of one of the best open air venues in the world, Fatboy Slim's boy wonder, catch him before he heads for the stars.