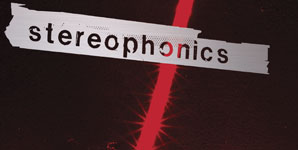 Celebrating 10 years of musical excellence, Stereophonics take this special anniversary to reveal the private face of the band with the 2nd April 2007 DVD release of `Rewind'. This definitive documentary captures everything from the story-so-far. Growing up, getting together, sending off 12 demo tapes a week, the first break-out record, and on through growing acclaim, recognition by their musical peers, internal struggles, world tours, four consecutive No.1 albums, their first No.1 single Dakota, and continued success...

Rewind (the DVD) celebrates 10 years in the music industry. Do you see Stereophonics being around for a 20 year anniversary?
Ten years has gone by so quickly that I think another 10 years shouldn't be a problem. There's no reason why not, as long as we are into what we are doing I think it can last a long time. You only have to look at bands like The Stones, U2, Chilli Peppers and if you keep on top of your game and make sure you keep it fresh and challenging then you won't get bored with what you do.

Was it a conscious decision even in your early years to document what happened in the studio and out the road, which has now led to much of the footage on the DVD?
It began with a friend of ours taking photos so we could use them in artwork, and it just made sense to carry it on from there. We all love the footage you see on music documentaries from yesteryear with all the bad haircuts and warts n' all clips and we wanted to have that element on our DVD and to show how it really was. There's too many band DVD's out there, where everyone is trying to be so cool that it's about real as a flying giraffe !

Having become one of Britain's biggest rock bands in the last decade but not really having 'cracked' America, is it an ambition to achieve more global success and recognition?
Every band wants to be able to reach the biggest audience possible everywhere, it's pointless doing it if you want to be the biggest fish in a small pond. We've been touring America and everywhere else at least twice on each album. There are a lot of factors in being a success in some countries, and a lot of those things are out of your control. Breaking our balls over something that's out of our control is pointless, you've just got to do what you do and hopefully luck and timing can fall on your side sometimes.

Stereophonics have had quite a career so far, what¹s been the ultimate high point and low point for you so far?
Highs have been meeting all our heroes and touring with them - Wembley stadium with Aerosmith, Madison Square Gardens with U2, Earls Court with The Who. As far as the lows, they are just something you've got to take with the highs.


You¹ve proved to the world that you¹re great musicians & songwriters!
What aren¹t you so good at?
Brain Surgery!

If someone asked you for advice on being in a band, what would you offer them?
Go for it, and stick to what you want to do. There's no point in doing it if it's for someone else. Also, you need to take the criticism and turn it into something positive and learn to use it to your advantage.