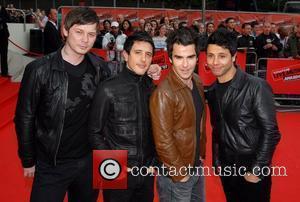 Stereophonics frontman Kelly Jones was stopped from boarding a flight at London's Heathrow Airport, after the gun print on his T-shirt sparked a security alert.

The HAVE A NICE DAY singer was taken aside by over-vigilant officials after his clothes set off a metal detector.

And Jones was left amazed when told his T-shirt - which shows a pistol with a flame coming out of the top - was unsuitable for flying in.

Jones explains, "I beeped as I went through the metal detector, so they took my belt, watch and phone off.

A security man then pointed to the star's T-shirt.

"So he called his superior over. By this point I was like 'You're having a laugh, mate.' He started asking me if it was embossed with anything, but it wasn't.

"I thought he was going to ask me to strip down and change. I mean, it's not as if my T-shirt was loaded."