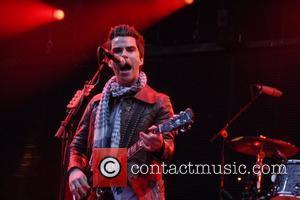 Stereophonics frontman Kelly Jones is in "total shock" after the death of STUART CABLE - because he had plans to meet with his ex-bandmate the day he died.
Cable, who celebrated his 40th birthday three weeks ago (19May10), was found dead on Monday (07Jun10) at his home in Wales. His cause of death is not yet known.
Jones and Cable grew up together before finding fame in the Stereophonics - but the drummer was kicked out of the group in 2003 amid reports of an alleged drug addiction.
The two old friends had patched up their differences in recent years and Jones reveals he was planning to meet Cable for a drink the day he died.
He says, "I sent him a text last week to say happy birthday and he replied, 'I never thought I'd make it to 40.' I texted him back and I said, 'You will live to be 100, mate.' I'm in total shock. I was going to see Stuart today for a pint and wish him happy birthday as well.
"So that's one of the last things we said to each other, which is quite strange really."
And the singer, who attended his uncle's funeral on Monday just after learning of Cable's death, admits his pal will be greatly missed: "I've been with Stuart all my life, did our first show together when I was 12. I've been with him more than I've been away from him.
"Between me and him, all our differences were settled within a year of all that (Cable leaving the band). I still can't quite believe it, to be honest with you, I'm in shock. I can't even begin to tell you what we've been through together as friends and bandmates. Just going to the crematorium for my uncle's funeral, I had to pass his house. It's pretty surreal."