Review of Live From Dakota Album by Stereophonics 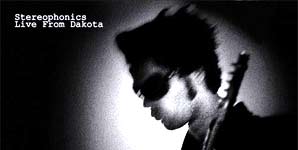 With the release of their fifth album last year, Stereophonics reinvigorated their music with an energy that had largely been absent since their earlier records. What followed was a year spent on the road; an experience that was recorded and is now presented on this double CD set that features hits and hidden gems spanning the career of the band.

Closely following the set from their gigs, the album opens with raw and dynamic versions of "Superman" and "Doorman". Both are loud and brash, with the latter featuring a killer guitar solo, before the band delve into their back catalogue. "A Thousand Trees" is as big an anthem as when it was first released, while the press-baiting "Mr Writer" is given new life by being stripped to an 'electric' sound. Album track "Deadhead" also proves to pack a punch live, before the band unleash "The Bartender And The Thief" and "Local Boy In The Photograph", songs that even non-phonics fans would have to admit are pretty damn good.

'Side two' seems to be aimed much more at the band's hardcore fans, with the appearance of lesser hits such as "Hurry Up And Wait" and "Vegas Two Times". There is also another pair of album tracks, and early b-side "Carrot Cake And Wine", a fantastic song from the bands past that perhaps would have benefited from a slight lifting of the tempo. "Madame Helga" proves Kelly Jones to have a spine-tingling powerful voice, and the audience doesn't sound too bad either, taking over for a verse of "Traffic" â it's a moment that really captures the magic of a live performance. Perhaps the most interesting song to appear is new track "Jayne", but it's a so-so number that pales in comparison to much of what is found here. An extended version of Stereophonics' first number one single, "Dakota", ends the 'gig' in carnival atmosphere. It's unlikely any new fans will be won with this release, but existing 'phonics fans will love it, and those who saw them on tour now have the perfect memento.