Stephen Moyer doesn't worry if his 'True Blood' co-stars and crew think more about his sex life because he is engaged to on-screen lover Anna Paquin. 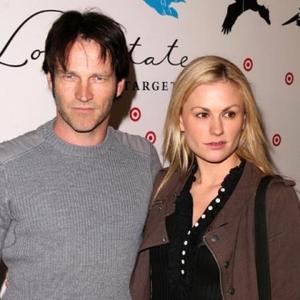 Stephen Moyer claims his 'True Blood' love scenes are more believable because he is engaged to his co-star.

The British actor - who is romancing Anna Paquin - doesn't care if filming raunchy moments makes the cast and crew of the vampire drama series think more about his own sex life because he believes his relationship makes the scenes less "awkward".

He explained: "Everybody on set now gets to see what goes on behind closed doors. leave nothing to the imagination.

"Our love scenes actually work really well. Since the crew knows we do have chemistry and are together in real life, I feel like it takes away from the nerve-racking tension that can occur when people have to watch two actors who are just getting to know each other engage in an intimate scene."

The 40-year-old star - who got engaged to Anna, 27, last summer - realised the actress was "the one" when they had to spend time apart after filming the 'True Blood' pilot two years ago.

He explained to Redbook magazine: "We were the only two actors who didn't live in Los Angeles, so we ended up going to dinner almost every night while filming the pilot.

"When we finished filming, I went to London and she went to New York, and it felt so weird not to talk to her. So, we began Skyping and have been together ever since."

Stephen - who plays vampire Bill Compton opposite Anna as Sookie Stackhouse - claims he has learned about the value of honesty from the actress and will always speak the truth to her, even if it risks upsetting her.

He added: "Even if you know that what you'll say will hurt a woman's feelings, I've learned that it's better to be truthful with her than it is to cover up. Ultimate honesty is what a relationship is really about."