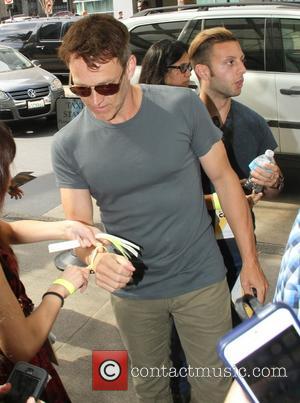 British actor Stephen Moyer has detailed his battle with alcoholism for the first time to encourage fellow recovering addicts not to feel ashamed of their faults.

The True Blood star has been sober for 14 years and on Friday (27Feb15), he agreed to share his addiction experiences with others as part of a panel discussion at the Clare Foundation, a non-profit treatment facility in Santa Monica, California.

Moyer, who has served as a Clare boardmember for the past five years, has previously only briefly discussed his sobriety, but he addressed his past troubles in depth for the first time at the event, revealing he used to think nothing of following in the hard-drinking footsteps of his acting heroes, Peter O'Toole, Richard Burton, Richard Harris and Oliver Reed, because going for a booze after work was the thing to do.

He explained, "There's this rush that happens from doing our job, this whirring buzz, and you want to continue that buzz."

Moyer soon realised he had a problem and subsequently checked himself into a British rehab facility.

He has been working with other embattled individuals to help them tackle similar issues ever since and he believes a key part of overcoming such troubles is speaking openly about it to remove the stigma of addiction, according to The Hollywood Reporter.

He said, "Self-loathing motivates the desire to get loaded (drunk) in the first place, and post-sobriety, there is the shame of admitting all of your (faults). It's about education. And it's about getting rid of that shame."

Moyer claims speaking openly about his alcoholism has prompted waiters at local restaurants in his Los Angeles neighbourhood to take note, and now they know just to bring him a diet soda whenever he goes out to eat with his wife Anna Paquin.

He added, "The Diet Coke, which is the Patron Saint of drinks for alcoholics, gets put before me before anyone even asks what we're drinking."