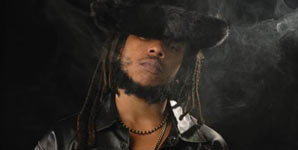 There's this old black and white photo of Stephen Marley; it's a portrait of the lion as a young man. He's standing against a wall of bamboo rocking short hair and an '80s-style I-Threes t-shirt--puffed up and proud the way only a rebel youth can be. But there's something else in the image--something about the intensity and focus in Stephen's face even as a teen--that shows in an instant that having the last name "Marley" has nothing to do with being the son of a musical icon or an heir to a throne. It does, however, have everything to do with being an individual with a purpose.

Stephen hammers this point home with the release of Mind Control--his highly anticipated solo debut. Music heads have been up on his work for years, whether for collaborations with R&B stars like Erykah Badu or his part on the dancehall burner "It Was Written", and especially after Chant Down Babylon, the platinum-selling star-studded Bob Marley tribute he produced. But Mind Control represents a new stage in Stephen's evolution, one that brings together the genius of his production and his wise and soulful voice with hip-hop beats, smoky bass and winding keyboard runs. This is the sound of a man coming into full realization of his powers--and his legacy.

"It's a blessing to not have to stagger through life. I was born firm and conscious," explains Stephen, who was first heard on record at age six as part of the family's group Ziggy Marley and the Melody Makers. All the Marley children share the politics and passion of their father, so Stephen needed no introduction when he stepped up to become the de facto musical hub of his father's recordings and the family's various projects around age 18. "It was a special experience but at the same time it was nothing new, because I grew up around it--so I had it," he continues. "But even though I had it, I still had to man it. And even if it's anticipated, it come when it come."

Now the wait is over, and perhaps the most surprising thing about Mind Control is just how rooted in the real world it is. Never content to simply rehash the sounds and themes of the past, Stephen uses the full length of the album to balance his range of ideas as a songwriter, musician and a man. The lead single 'Mind Control" opens the album with a slow-burning groove that builds to a brushfire as it calls out the unseen social forces that still subject us to mental slavery; "Chase Dem" is even more explicit about the effect of political corruption on our lives. Stephen is never dragged under by bitterness, however: "Inna Di Red" is a poetic mystical soul search that escapes the shackles of everyday strife, while the album's title track is a family roll call that shows the unity of the Marley clan in the face of struggle.

The softer and sweeter side of Stephen is also on full display in the album. A smooth, smart slab of hip-hop featuring a dose of Brooklyn flow courtesy of Mos Def on the album's first single, "Hey Baby," is based on a song Stephen would sing to his children to keep them from being sad while he was on tour with The Melody Makers: "Hey baby/ don't you worry/ even though the road is rocky/ I'll be coming home to you again." The hypnotic "Lonely Avenue," is a sweet, harmony vocal- and organ-soaked take on the Ray Charles classic-done Marley style. "I'm a big fan of Ray," says Marley. "I couldn't tell you the first time I heard him, but I could tell ya what I remember is hearing him and feeling him in pain." Blending modern sounds with classic roots vibes, Mind Control finds Stephen carrying the Marley legacy even further into the future with such samples as the smart piece of the Martina Topley Bird song "Sandpaper Kisses" heard throughout "You're Gonna Leave."

The album includes a trilogy of sorts ("Officer Jimmy Interlude," "The Traffic Jam," featuring Damian, and "Iron Bars," featuring brother Julian Marley, Mr. Cheeks & Spragga Benz) inspired by the few hours that Stephen and Julian spent in a Tallahassee jail in 2002 for marijuana possession: On "Iron Bars"-the song in which he sings "Let me out!/Let me out!/I'm an angry lion!"-Stephen asks himself, "What am I doing here, among the wolves? For some herb? It's like I'm a murderer. Ya know what I mean? Ya make me feel like I'm a murderer, for some herb, where, ya know, it's my culture."

Mind Control "has more magic than 'great songs,'" says Stephen mischievously. "But it has a little magic in it, still." And perhaps more than anything that's the secret to this Marley's auspicious solo debut: the magic created when diverse roots combine in an artist's singular musical vision--when a blistering electric guitar solo slides into a bluesy harmonica riff and Stephen's wails let me out, let me out/I'm an angry lion on "Iron Bars", a collaboration with brother Julian and longtime friend the rapper Mr Cheeks--the only guest artists on the album. With the release of Got Music? that lion is out--and he's roaring.