A series adaptation of Stephen King's 'The Mist' is coming this summer.

Our first look at the forthcoming series adaptation of Stephen King's popular novella 'The Mist' has finally arrived in the form of a gripping trailer for Spike TV. The 10 episode first season is set to air this summer, but this isn't just about a small town grocery store anymore.

'The Mist' comes to Spike TV this June

This time, instead of focusing on a group of people forced to congregate in a grocery store, we see people trapped in a large shopping mall, a small church, a hotel room and their own cars as a thick, swirling fog swallows the whole town bringing with it horrors not of this world.

The dangers of the Mist isn't just the beast which conceals itself within it, however; the curse of this engulfing force is that it makes humanity a danger to themselves. Fear, cabin fever and selfish survival instincts turn people into villains and threaten the sanity of the most level-headed of people.

'I wanted to be respectful to the source material, but my feeling was there was already a great adaptation out there by Frank Darabont', Torpe told EW. 'The novella is 200 pages and one location, and we needed to change that to make an ongoing series. But we wanted to remain faithful to the heart of the story.' 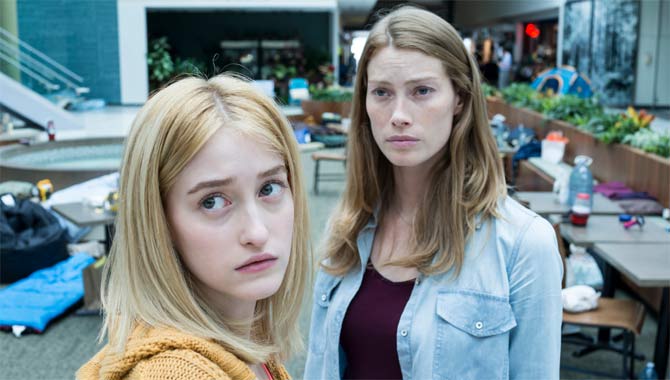 Alyssa Sutherland stars alongside Gus Birney in 'The Mist'

The series was shot in Nova Scotia, Canada and stars Alyssa Sutherland ('Vikings', 'Don't Look Up'), Isiah Whitlock Jr. ('Veep', 'CHIPS') and Bill Carr ('Blackbird', 'Moving Day'). It was originally in development back in 2013 as a collaborative project between Bob Weinstein and Frank Darabont. But when that fell through it was picked up by Spike in 2016.

'The Mist' isn't the only brand new Stephen King adaptation this year; 'It' arrives this fall as a cinematic horror starring Bill Skarsgård and Finn Wolfhard, and 'The Dark Tower' comes this summer starring Matthew McConaughey and Idris Elba.