'No Matter What' hitmakers Boyzone were joined on stage on Saturday (21.11.09) by their former bandmate Stephen Gately's grieving widower Andrew Cowles.

The group - consisting of Ronan Keating, Keith Duffy, Mikey Graham and Shane Lynch - performed at Ronan's Emerald and Ivy Ball in Battersea, south London, on Saturday night (21.11.09) where Stephen's grieving husband took to the stage to pay tribute to the late pop star.

Ronan told him: "With you being here tonight, the four of us, Boyzone, feel like five."

Also during the evening Ronan performed alongside Take That star Gary Barlow.

The pair sang a rendition of 'Back For Good' - which Take That topped the UK charts with in 1995 - to the cheering audience.

The bash is an annual event in aid of the Marie Keating Foundation which Ronan and his family set up when his mother Marie died of breast cancer in 1998.

Stephen died aged 33 from an acute pulmonary oedema, a build-up of fluid in the lungs, while on holiday with Andy at their villa in Majorca on October 10.

Since his shock passing, his bandmates have regularly spoken out about their devastation at losing their long-time friend.

Ronan recently admitted: "I just feel worn out. I haven't been sleeping. My brain doesn't work. My heart's broken. You just feel crushed. I've had good days and bad days.

"The bad days are horrible, it's like the walls are coming in on top of you. Anxiety I think is what they call it. 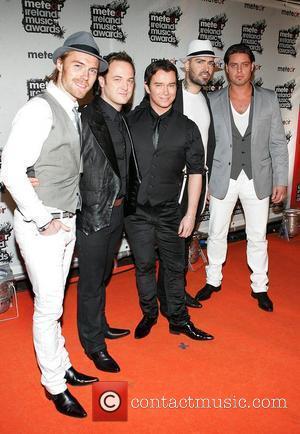