The comedian has deactivated his account after facing criticism following a joke he made during Sunday night’s BAFTAs. 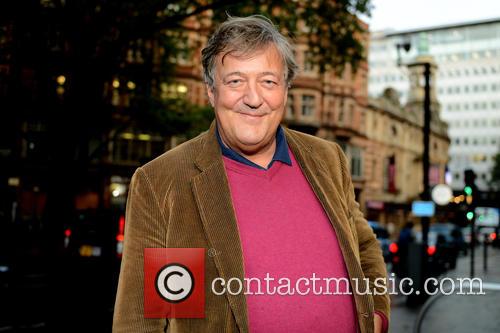 Blogging on his website Fry said: ‘It’s no big deal – as it shouldn’t be. But yes, for anyone interested I have indeed deactivated my twitter account. I’ve ‘left’ twitter before, of course: many people have time off from it whether they are in the public eye or not. Think of it as not much more than leaving a room.’

‘I like to believe I haven’t slammed the door, much less stalked off in a huff throwing my toys out of the pram as I go or however one should phrase it. It’s quite simple really: the room had started to smell. Really quite bad.’

Before deactivating his account, Fry had fired back at those to were offended by his joke about Beavan’s appearance. ‘So just a word to the tragic figures who think calling Jenny Bevan a bag lady was an insult. She's a dear friend and she got it. Derrr,’ Fry had tweeted.

'Will all you sanctimonious f***ers f*** the f*** off Jenny Beavan is a friend and joshing is legitimate. Christ I want to leave the planet.’ The 58-year-old then tweeted a picture of himself with Beavan and wrote: ‘Jenny Baglady Beavan and Stephen Outrageous Misogynist Swine Fry at the #EEBAFTAs after party’.

In his blog post Fry referred to twitter as like ‘a secret bathing-pool’, in the early days, but said that now, ‘too many people have peed in the pool for you to want to swim there any more. The fun is over.’

He added that twitter had become, ‘A stalking ground for the sanctimoniously self-righteous who love to second-guess, to leap to conclusions and be offended – worse, to be offended on behalf of others they do not even know.’

Fry concluded by saying that now he’d left the social networking site he felt a ‘massive relief, like a boulder rolling off my chest,’ adding, ‘I am free, free at last.’ Since opening his twitter in 2008 Fry had become one of the most prolific celebrity tweeters, with his account gaining over 12 million online followers.