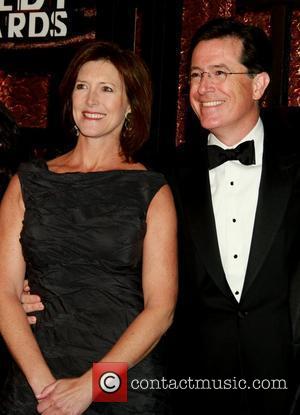 Stephen Colbert is to return to television on Monday evening (February 20, 2012), after taking time off to be with his ailing mother. Colbert's Comedy Central show was cancelled on Wednesday and Thursday of last week, with the network citing "unforeseen circumstances".
Fans queuing to attend the tapings were told to go home, with little else by way of an explanation given. Reports have since suggested Colbert's 91-year-old mother, with whom he is extremely close, is ill. Further details of Lorna Colbert's condition are not known, but a source told the New York Post, "They are a very private family.It's not surprising that he did not want anyone to know what was going on". On Saturday (February 18, 2012), Colbert tweeted, "My family and I would like to thank everyone who has offered their thoughts and prayers. We are grateful and touched by your concern". When Stephen was 10-years-old, his father James and his two brothers were killed in an airplane crash - the tragedy is understood to have brought Colbert and his mother closer together.
The break in Colbert's political-satire show came at a crucial stretch for the Republican Party, with their Presidential primary now in full swing. Mitt Romney is still considered the favorite to lead his party into the 2012 Election, though Rick Santorum has made an unexpected late push.