He seems much more believable than the real deal.

Stephen Colbert has outlined the ridiculousness of Donald Trump by turning him into a cartoon - who actually seems to make a lot more sense than Trump himself. After inviting the animated version of the Republican candidate on the show a week ago, Colbert has brought him back to discuss his apparent lack of numerical understanding. 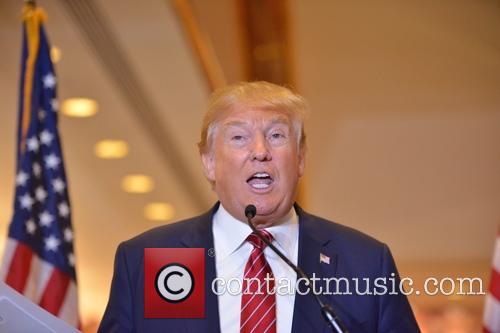 Donald Trump is a parody of himself

Ahead of the Wisconsin Primary, 'The Late Show with Stephen Colbert' presenter was quick to re-assure us that poll numbers were dropping for Trump, with 30% of people being Trump supporters and 70% being very much anti-Trump. We're hardly surprised either, what with him repeatedly resorting to absurd 'cartoon tactics', as Colbert put it, to get voters.

Trump isn't willing to acknowledge this downturn. He took to Twitter recently to share a poster for the Wisconsin primary featuring a black and white shot of himself, the words 'Vote Trump' and 'New Wisconsin Poll', alongside 'Trump 37%' in large letters and, bafflingly, 'Cruz 38%' in small letters. It was as if, in Colbert's view, he thought his numbers were greater because he used a bigger font.

'My numbers could crush Ted Cruz's numbers in a pay-per-view fight at my Las Vegas hotel', said cartoon Donald Trump on the show. Asked if he's concerned that Republican rival Cruz will get more votes at the Primary, he says: 'No, because I'm gonna get the biggest votes. I'm talking checkmarks so huge, you're going to need two ballots just to fit it on there.'

After being told that he can't win an election by increasing font size, cartoon Donald Trump went off on a very Trump-like double entendre. 'Stephen, I guarantee I've never been accused of having a small font', he said. 'Listen, seriously, there's no problem in that department. Believe you me, it is Helvetica bold.'

A hilarious segment, even if the satirist's jokes will no doubt soon be outshone by something Trump actually says.