'The Colbert Report' came under fire when an offensive tweet offended the Asian community, but the 49 year-old host insisted the hastag #CancelColbert failed to work. 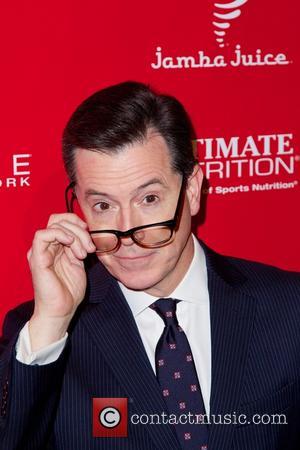 Controversy and Stephen Colbert are a frequent mix, but as the latest wave of critic's slam the comedian, he decided to address the situation head on.

On Tuesday's episode of 'The Colbert Report,' the 49 year-old spoke about the recent racial controversy he caused with the Asian community, in a segment called 'Who's Attacking Me Now?'

Colbert's show was under fire after its Twitter account said the host had created a fake charity called 'The Ching-Chong Ding-Dong Foundation for Sensitivity to Orientals or Whatever.'

Since then an uproar has begun on the social media site with users creating the hashtag #CancelColbert, which obviously called for Comedy Central to cancel the satirical program.

"We almost lost me," he joked on Tuesday's episode. "I'm never going to take me for granted ever again."

"Internet equality is more important than ever, as I learned this weekend when the interwebs tried to swallow me whole," he continued. "But I am proud to say that I got lodged in its throat and it hacked me back up like a hastily chewed chicken wing."

"When the twit hit the fan," he continued, "the brain trust over at my network took the tweet down."

Although he admitted to understanding why it could have offended the Asian community, the television host isn't racist because, "I don't even see race." But he was impressed with how long #CancelColbert was trending worldwide, which is "because everybody wants to talk about the king."

"CNN even took a break from their Malaysian airliner coverage to report spotting what they thought was the wreckage of my show off the coast of Australia," Colbert added.