Where Does The 'Arrow' Season 4 Finale Leave Season 5?

Another season of 'Arrow' has come and gone and the world has been saved by Green Arrow and his team once again. Though with this finale seeing them face off against thousands of nuclear missiles, it's difficult to fathom just where the series will go come season five.

Stephen Amell meets his match in season 4 of 'Arrow'

Warning, spoilers ahead! It's been a rollercoaster of a season for the newly-dubbed Green Arrow; he's re-named Starling City as Star City and he has to deal with potentially his most dangerous nemesis yet: Damien Darhk (Neal McDonough). Darhk, as 'Arrow' viewers will know is in possession of a variety of magical powers that allows him to control the world around him, but when he becomes in position of 15,000 nuclear warheads in the 23rd and final episode of season four, 'Schism', things start to get real serious.

As it happens, Oliver Queen (Stephen Amell) and his team only have two hours to prevent the world's destruction. Of course, he does it in the end, with a combination of his exceptional public speaking skills and his friends' hacking abilities, and then Queen is forced to finally kill Darhk. With that whole shebang over and done with, naturally he gets appointed Mayor. In the usual flashbacks, we also see him kill the corrupted Reiter and then Taiana on her request. 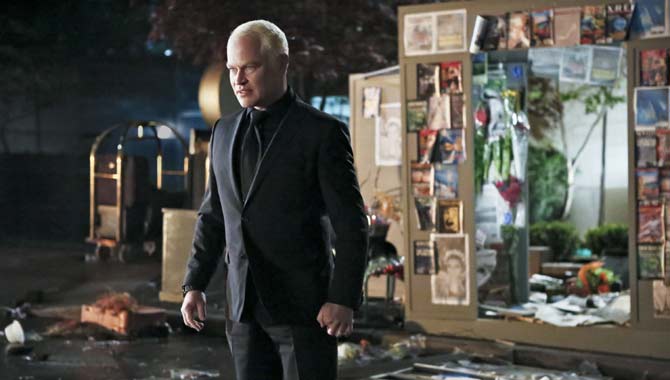 Darhk finally gets what's coming to him

That's a lot of killing going on. And it's no wonder that his comrades John Diggle (David Ramsey) and Thea (Willa Holland) have decided to take a break from fighting crime, leaving Arrow with only Felicity (Emily Bett Rickards) on hand to help him. But hey, now that he's Mayor, he probably won't find it too difficult to start recruiting for the next danger Star City faces.

Confirmation that a fifth season of 'Arrow' was set to return to The CW came earlier this year on March 11th 2016.