Davis and McConnell were back together less than 12 hours after they were reported to have broken up, and it seems as if Schofield's had enough.

After the interminable ‘are they, aren’t they’ relationship shenanigans that have been going on since they left the ‘Celebrity Big Brother’ house, Phillip Schofield has spoken out for a great many onlookers as he branded Stephanie Davis’ and Jeremy McConnell’s behaviour as “nonsense”.

Speaking to showbiz correspondent Ferne McCann on ITV’s ‘This Morning’ on Tuesday (February 23rd), Schofield felt he could take no more gossip about the pair, and despite being live on air he launched into a tirade against ‘Jephanie’’s on-off relationship.

As former ‘TOWIE’ star McCann confirmed that Davis and McConnell were actually still together despite yesterday’s rumour that they had broken up, Schofield blurted out: “Who cares! Do you know what? I'm sick to death of these two.”

Slightly wrong-footed by the interjection, McCann actually agreed with Schofield on the subject, saying: “This is what I think, right, they were supposed to appear on ‘Loose Women’ yesterday and they pulled out because they broke up but less than 24 hours she was posting on Twitter, ‘I'm still madly in love with him, we're trying to work things out’. He posted a picture on his Instagram of them cuddling on the bed.”

More: Are they or aren’t they? Jeremy McConnell confirms split, but Stephanie Davis says the couple are still together

“I should imagine the production team of ‘Loose Women’ are pretty furious that they pulled out of the show and then rocked up later on. I think it's embarrassing on their part. If you're going out with someone and you have a squabble, you haven't got to post it all over you social media,” she continued.

To which Phillip, clearly baffled and frustrated about the amount of exposure they’re getting, witheringly responded: “Now they’re embroiled in all this nonsense, I can’t be bothered anymore.” 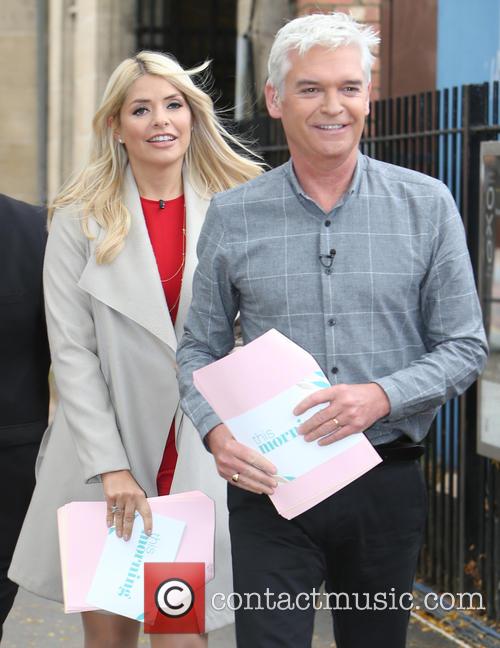 Phillip Schofield with 'This Morning' co-host Holly Willoughby in 2015

About the confusion, in which the couple tweeted pictures of themselves very much ‘together’ despite many reports on Monday that they’d broken up, Irish model Jeremy had the following to say on Tuesday morning:

“Just letting people know, me and Steph are fine. We are very happy we both have mad schedules. It's my job to go on a personal appearance and get pictures with girls. Steph comes and stays in hotel with me. We trust each other and love each other. Sadly the media twist a lot of stuff which puts pressure on. Thanks for all the support :).”