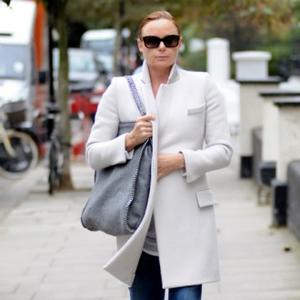 The horse is named 'Lucky Spot' after a mare owned by the British designer's late mother, Linda, and was created by Stella in 2004 from 8,000 crystals.

It shows the animal reared up on its two hind legs and was designed to capture the power of a horse mid-leap.

The sculpture was imported from England, where it has been on loan to the country's Belsay Castle, for the opening.

The horse stands as the centrepiece of Stella's flagship new boutique in the CityCenter area of the US city.

Stella's store opened just before the Christmas holidays and carries a full range of the designer's women's ready-to-wear range, as well as shoes, bags, sunglasses, and recently added Children's collection.

Stella â who has gave birth to her fourth daughter, Reiley, in November - said she had been inspired by her own large family to create a range of clothing for children.

She explained: "I wanted to do affordable and accessible kids clothes that are still timeless with a great quality that you would want to pass down for generations.

"Kids and parents, aunts, uncles, friends, should all be able to have access to Stella McCartney Kids clothes.

"We have tried to make that possible in this first collection, and hope it is enjoyed!"

To celebrate the opening of the store Stella also designed and sold an exclusive T-shirt.