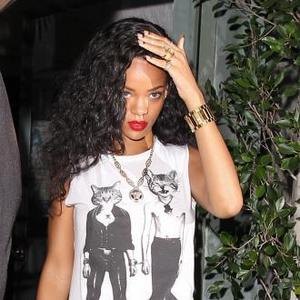 Stella Mccartney is taking inspiration from Rihanna for her new fashion range.

The British designer - who created Team GB's Outfits for the London 2012 Olympics and Paralympics - reportedly frequently calls up the 24-year-old pop star to talk about her latest style inspirations because she wants to reach out to a younger generation of fashion lovers.

A source told the Mail On Sunday newspaper: ''They have been having regular chats. They call them 'mood calls'.

''Stella rings Rihanna and asks her to explain what has influenced her mood that day - colours, textures, patterns.

''Stella feels she needs to tap into a younger generation and Rihanna is happy to help. It's a bizarre way to create a fashion line but they work well together.''

Rihanna is currently the face of Sky Living reality show 'Styled to Rock', which sees aspiring designers pitted against each other in a bid to create a festival look for the 'You Da One' singer.

However, the trendsetter's show - which boasts Girls Aloud star Nicola Roberts and designer Henry Holland as judges - hasn't been as successful as predicted. The first episode was watched by 95,000 viewers, before falling to just 79,000 with the second.

The Fashion-conscious star is known for her bold Outfit choices and has often expressed her love of quirky British fashion.

''I really wanted to do this show because I love discovering new designers and finding things that are fresh and trendsetting.''