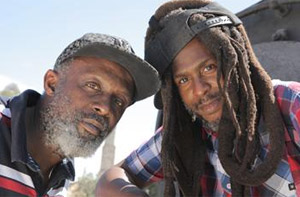 Steel Pulse may have explored various styles of music since they started out in 1975, but when it comes to the message, the UK's Grammy - Winning reggae band has remained close to their roots.  The Group have continued their commitment to fighting injustice, educating the masses, and promoting positive messages through spiritually uplifting music.

"We just can't ignore the politics, because every life and soul that's born on this earth is a political manoeuvre for someone, at some point", Hinds explains.  "From a spiritual aspect, it's really an upliftment through facing reality - what's out there.  We deal with positive spirits.  It means putting aside the guns, the drugs and all of the things that are ailments of society - especially in the black communities right now".

The band have always taken their causes to heart, filing a $1 million class action lawsuit against New York City's Taxi & Limousine Commission.  The group charged that cabbies refused to pick up blacks and especially Rastafarians throughout the streets of New York. 2012 commemorates the 20th anniversary of this action.

Invited guest appearances include Arsenio Hall, 'The Tonight Show' with Jay Leno, The Montel Williams Show and 'Late Night' with Conan O'Brien.  The Rev. Al Sharpton, Jay Leno, Branford Marsalis, C Thomas Howell and Robert Townsend have all had cameo appearances in Steel Pulse videos.  The band have been joined live on stage by artists as diverse as Stevie Wonder to the Stranglers and have performed live with Bob Marley & the Wailers, Sting, Inxs, Santana, Robert Palmer, Peter Tosh, Herbie Hancock and Bob Dylan, amongst others. A collaboration with Spike Lee on the Do The Right Thing movie soundtrack in 1989 resulted in David's composition 'Can't Stand It' featuring in the movie.

In 1993, at the request of the Clinton Administration, they became the first reggae band ever to perform during the inaugural festivities at The White House.

Steel Pulse, started out performing on the British punk scene with groups like Generation X as part of the Rock Against Racism movement was founded in the Handsworth section of Birmingham by Hinds, and core members Selwyn Brown and, Steve Nisbett.  Their original Bass player, Ronald McQueen, named the group after a popular racehorse.

2012 saw the release of Rocksteady, a film co-starring David Hinds and featuring the band's live members.  The Hind's track Rocksteady was composed especially for the movie.

The group performed in Haiti for the first time also in 2012. The track Hold on 4 Haiti was written as result of the earthquake and they have been instrumental in raising thousands of dollars for the relief effort with Partners in Health. Previously the band made a massive contribution to  Hurricane Katrina.

Steel Pulse are currently working on a new album which will be released later in 2013 and also a documentary of their long career which features live footage and interviews.