'Star Wars: The Force Awakens' is all about diversity.

John Boyega is one of the newest members of the 'Star Wars' franchise and, in case you haven't been following the little promotional material that has already been released for 'The Force Awakens', he also happens to be one of the only black characters. Such recognition of diversity ought to be praised, but his involvement has sparked controversy among the prejudiced fans of the web since he appeared in the first trailer. 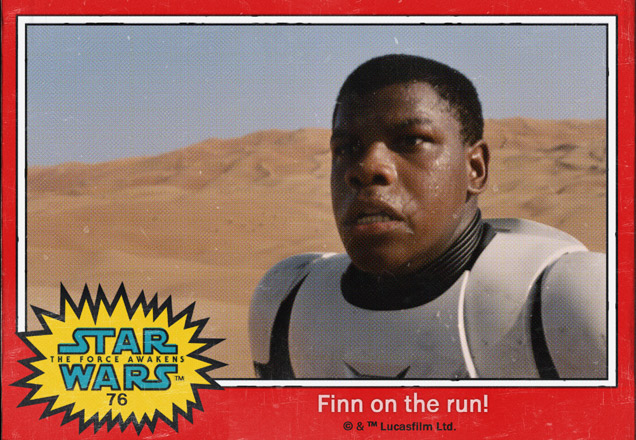 John Boyega stars as Finn in 'The Force Awakens'

However, the up and coming British star isn't letting such ridiculous internet trolling get to him. 'I'll be honest; I really don't care about the black Stormtrooper stuff', Boyega, who plays the character Finn in the movie, insists. 'I couldn't care less.' Instead, he's focusing more on the wider elements of the film, and the true meaning within the plot. 'This is a movie about human beings, about Wookies, about spaceships and TIE fighters and it has a message of courage and friendship and loyalty and I think that's something that's ultimately important.'

While diversity is a strong theme within the story - take, for instance, Gwendoline Christie's involvement as the first female 'Star Wars' villain Captain Phasma - Boyega reveals that it doesn't ever take away from the relatability of the characters. In fact, he found the character he most related to on a personal level was Daisy Ridley's Rey. 'To be in a circumstance where you have to find something bigger than who you are within yourself is something that's inspirational to me', he said.

Watch the trailer for 'Star Wars: The Force Awakens' here:

To have a black character enter this enormous fictional world was, sadly, unexpected; in this day and age it shouldn't be any more unanticipated than any white person but, alas, progress is still to be made in the film industry. It did provide some amusement for Boyega though, especially when it came to reading up on obscure fan theories.

'I remember reading the theory that Finn is Mace Windu's grandson or something like that', he revealed, referring to the Jedi Master that appeared in the first Episodes I, II and III. 'I was at a party and someone behind me just tapped me on the shoulder just like, 'Yo, black Jedi!' I turned around, it was Samuel L. Jackson! He's like, 'You're my son!''

More: Producer reveals what we won't see in the movie