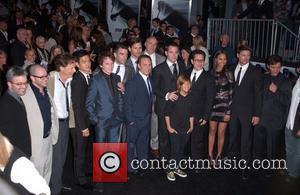 Star Trek star Chris Pine left a stuntman with a broken nose after a fight scene on the set of the much-anticipated sci-fi blockbuster got out of hand.
The actor admits he felt terrible when he saw blood gushing from the guy's nose after a wayward punch hit him squarely in the face.
He tells Parade.com, "There's a big fight scene in a bar with me and five stunt guys, who were the best in the business.
"I'm a little guy and they were big, honking monsters but I actually ended up breaking the nose of one of them... Everyone's hands were going so fast and I just tagged him. We stopped filming and I felt really bad, but the guy was like, 'Don't worry about it.'"
But karma kicked in as the cameras started rolling again: "In the next shot, one of them (stuntmen) hit me in the stomach by accident and knocked the wind out of me. It was stuntman payback."