Pregnancy news has surfaced just days after it was reported the former wrestler married tech entrepreneur Jared Pobre in a secret wedding ceremony on a beach in Mexico. 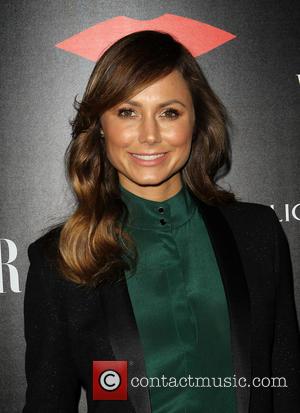 The pair have been friends for almost five years, but only started dating last September (2013).

The couple's wedding took place on a sunset setting on a beach in Mexico, with only close relatives attending.

Now only a matter of days after news broke of her tying the knot, Kiebler is reportedly pregnant with her first child, according to Page Six.

However, neither of the newlyweds have confirmed nor denied this news.

But, Keibler has lifted the lid on their secret big day in the latest issue of People Magazine, which contains photographs of the beach ceremony.

Stacy can be seen looking gleaming in a custom Monique Lhuillier gown, walking hand in hand with the groom Pobre. The tech entrepreneur was sporting an all-white suit, topped off with a black top hat.

Interestingly, none of the photos published show the former model's stomach in full view, she has her back towards the camera in one snap, and her stomach is turned away in another.

The new bride also gushed to the mag about their family's reaction when they broke the news of the surprise wedding.

"Everyone was screaming and hugging and over the moon," she explained, when they told their relatives about the good news during the plane ride.

"We felt we wanted to put our money, energy and time into our intimate family and [share] this really special bond, special moment and special memory just with them. There's just so much love," Keibler continued.

"It was such a celebration of love with the whole family, better than I could have ever dreamed of," the former wrestler stated, when describing their actual wedding day. "We can't stop smiling."