The former wrestler wed her tech entrepreneur boyfriend after dating for only six months. 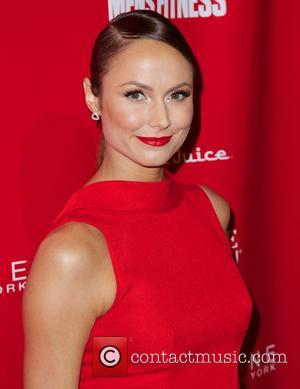 Stacy Keibler is officially off the market.

Their ceremony, which was kept a secret, took place on Saturday (March 8th) in a sunset setting on a beach in Mexico, according to People.

Keibler has become a bride less than a year after she separated from Hollywood star George Clooney, with whom she dated for 2 years.

Although it was a widely publicized relationship, the 34 year-old revealed that she was able to stay positive through the whole process.

"There's nothing really dramatic that happened so it's all good, Keibler, told Extra of the split in July 2013. "I'm someone that's always lived the present moment. I always look at the positive on everything. I'm so excited for all these projects coming up, and I'm super busy."

Stacy only stayed single for a matter of months as she began dating Pobre, for whom she has known for more than five years, this past fall (2013).

"My happiness is indescribable!" Keibler told People. "Marriage is the ultimate bond of love and friendship. It means putting all your faith and trust into a person that you can't help but believe is your soul mate. Someone who has all of your best interests at heart; someone handpicked for you, to help you grow and be the best person that you can be. Jared is all of this for me."

Their ceremony was a very intimate affair and their guests were mainly family members of close friends.

The couple released a joint statement about their big day which read, "We both felt strongly that our 'love day' should be intimately special, and that's exactly what it was. It was a blend of romance, tranquillity, natural beauty, bonding and overwhelming love."

This is the first marriage for both of them.