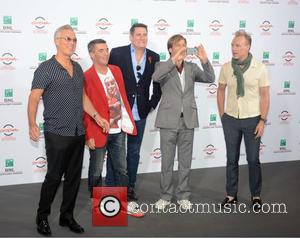 Spandau Ballet drummer John Keeble had to find a new lucky shirt to wear for the band's reunion shows when his favourite Alexander MCQueen item was stolen after a show in Barcelona, Spain.

The black T-shirt the True hitmaker wore as part of his stage ensemble went missing in 2010 and after an online campaign to get it back failed, Keeble has now given up on ever finding the clothing piece.

He tells Wenn, "Yeah, thank you Barcelona! Someone's got a very nice Alexander MCQueen T-shirt somewhere in the world.

"I really liked it and in all the dry cleaning that went out from all the Spandau guys, mine was the only thing that got nicked (stolen)."

Keeble is assembling his latest stage wardrobe as he and his Spandau Ballet bandmates prepare for a 13-date U.S. tour, which begins on San Francisco, California on 23 January (15).