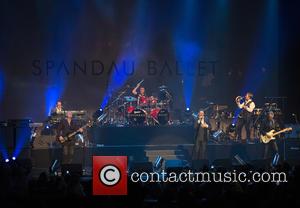 Eighties stars Spandau Ballet have paid tribute to Steve Strange, insisting they would never have found fame without the New Romantics star's vision.

The Gold hitmakers first came to public attention through their gigs at Strange's groundbreaking Blitz club nights in London, and the reaction from audiences at the shows propelled them to stardom.

The band dedicated their performance at Italy's Sanremo Music Festival on Thursday night (12Feb15) to the former Visage star after learning he had died earlier in the day, and now they have spoken out about Strange's huge influence on pop music in early 1980s Britain.

Singer Tony Hadley tells U.K. Tv show Loose Women, "He was a lovely man, he was a character. It was very unfair. Our hearts go out to his family."

Guitarist Gary Kemp says, "We wouldn't be here if it wasn't for him. I mean, what he started in the late '70s, early '80s which allowed us to become Spandau Ballet was incredible", and his bassist brother Martin adds, "There are just so many funny stories that make you smile."

Strange passed away on Thursday aged 55 after suffering a heart attack in Egypt.