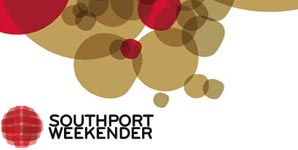 Southport Weekender has been dancing now for twenty years and the 40th weekender was always going to be a treat. Southport Weekender represents the epitome of one love musical spirit and everything that goes with it. Who would have thought that back in 1987 the emergence of a new breed of musical enthusiasts in the UK would create a platform for people to party and twenty years on still be on it. People keep going back to the weekender because you have such a great time and I guess that's why it sells out twice a year.

I was really excited about arriving at Southport. The event sold out four months ago and the line up was looking immense. This was a special one as it was homage to the twenty years that have made Southport Weekender one of the best parties in the world. A holiday camp by the sea with four rooms to play in and an array of chalets to keep the place ticking. There's soundsystems to keep you dancing and quality soul at the heart of it all. This was gonna be a good one.

The line up consisted of some of the greatest current and contemporary artists who have made this event such an institution. The joy of number 40 was that DJ's could play tunes that stemmed the lifetime of the Southport Weekender and many of them have been playing there since day one. In `The Connoisseurs' Corner you could expect every blend of soul music from Northern and Modern Soul through jazz funk, disco, rare groove, garage, house and funk. The `Alize Funkbase `represents the birth of r'n'b and hip hop. The DJ's have got this place locked to play the best classic tracks or contemporary future players to maximum funk potential. `The Powerhouse' is the biggest room and can squeeze about 2000 people in. The sound, visuals and energy in this ultimate party space is designed for great performances and memorable times. This was the focal point for the weekend's house music sound. Finally the Bacardi B-Live Arena, formally known as the Jazz Room and The Alternative Room, is the arena for ground breaking acts and original thinking. The loosely jazz-based mix of music in the B-Live room is largely down to the influence of the regular DJ's in there; Gilles Peterson, Snowboy, Kev Beadle and Simon Mansell. All have been appearing at Weekenders since day one and have collections that are quite literally the soundtrack to Southport.

So the stage was set for a mind blowing weekend. As soon as I went to get my pass low and behold there's Sir Norman Jay who was set to play a few sets at the Weekender. I got to the chalet and the atmosphere was buzzing. Everyone is smiling, looking good and ready to party all the way thorough the weekend. I first get to `The Powerhouse' and check out The Brand New Heavies. I wasn't expecting to be so blown away by them but due to the Southport crowd the atmosphere so reminded me of the days when I was moved by funk music in the early nineties. It was like reliving that time all over again. They played classic after classic and set the tone for many great life performances at this Weekender.

I went over to `Alize Funkbase' to see Bigger warming up the crowd. He was dropping bombs from Musique Soulchild to Biggie Smalls to an ever populating crowd with a serious mission to get down. With DJ's like DJ Serve, Steve Wren, Steve Sutherland, Shortee Blitz and DJ Diggz in the house you know this is quality r'n'b at its best. The bass was sounding great, the atmosphere electric.

Down at the B-Live room Gilles Peterson warmed up the crowd for Ben Westbeech who was about to play a live gig with his band. It happens to be his birthday and he delivers a first class performance to a truly uplifted crowd. His blend of soul, positivity and progressive music definitely worked at Southport and I'm sure we're gonna see him back there in the future. The B-Bar was set for I G Culture, Dixon and Moodyman to play the rest of the night playing the best in modern contemporary broken beat, electro and deep house.

Friday night ended and I couldn't believe what a great night I'd had. Everyone was so friendly and the best thing about this event is everyone loves to dance. There are some amazing jazz dancers and party people just waiting to get on the dancefloor but it's the atmosphere and amazing soundtrack wherever you go that creates the perfect platform to express yourself. Everyone is looking to have a good time and it makes no difference where you're from and what your background is. Everyone is on the same level and let's not forget the chalet factor. The party never stops. There's soundsystems everywhere and so many parties to go to yet you can still get a shower or chill if you want to. There's something for everyone at Southport.

Saturday started for me with an awesome set by Jazzie B in the afternoon.. He mixed funk with nu soul to true dancefloor rawkus effect. You'd expect to hear homage to the late James Brown at this Weekender and indeed many of the long lasting heavyweight DJ's paid much respect to the Godfather which was truly appreciated by all of us at Southport. This was a fantastic warm up for Angie Stone. Her enigmatic delivery of pure soul and truly inspirational words captivated the audience and left us filled with love. A Southport regular Chanelle described the gig as "breathtaking and wonderful".

I was so pleased I checked out the B-Live Bar Saturday afternoon. Bob Jones, playing in all the rooms this weekend was celebrating his landmark 40th year as a DJ. His contribution as DJ is profound and his ability to continue to grow as a DJ and still get the kids rocking shows he's still on the money. Saturday afternoon proved that for me. The music was intoxicating and deep. All the DJ's Billy Davidson, Scott Bradford and Colin Patterson turned that arena into Ibiza and it was perfect music for a Saturday meltdown.

Saturday night was immense. You've got the legendary Roy Ayers in `The Powerhouse' and the best house DJ's Frankie Feliciano, Louie Vega, DJ Spen and Kerri Chandler rocking the crowd till 8am. You've got the Magnificent DJ Jazzy Jeff, Trevor Nelson and Simon `Schoolboy' Phillips at the Funkbase. Terry Jones, Danny Krivit and Bob Jeffries playing a master class of fantastic classics and gems you've just never heard before creating the best disco environment I've ever been in. Finally in the Bacardi Bar there's the best in progressive innovators Marc Mac, Jazzanova, Benji B and Ron Trent to rock the whole night long. It doesn't get much better. Then off to a chalet party.

I was really happy that I stayed for the whole of Sunday. Some missed out on the Simon Mansell's aka Simon Says set, Simon delivered the ultimate party funk set on Sunday afternoon. It's just gem after gem, a DJ's paradise. Incognito did a fantastic moving set showing fantastic vocals and excellent musicianship. It was great to see a reflection of the Acid Jazz scene that made Southport Weekender so unique and so fitting for this 40th. Jonathan & Bob Jeffries played the music out showcasing tracks that have been played over the past twenty years at Southport this created such universal emotion amongst us dancing lovers. With the end in sight Marvin Gaye's `What Going On' seemed a fitting track for all us all at Southport celebrating life. However the party doesn't have to stop. There's always `The Sands' for the afterparty.

Well you can't see all the acts, otherwise you couldn't get the true Southport experience that brings you back and if there's chance of coming back I'm there. I can truthfully say this has been one of the best weekends of my life. Everything Southport Weekender stands for is positivity, unity and love of black soul music. It's the best environment to party and the people are amazing. Wherever you go there are dancefloor classics and whatever corner you turn to there's someone to meet or something to see. It' brilliant and it's no wonder that this event has lasted so long and I'm sure it can last for another twenty years.