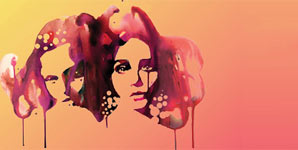 Well would you believe it that Southport Weekender is upon us again and it’s amazing how quickly time has gone by. It doesn’t seem two seconds ago when I was at Southport 42 dancing my heart out to DJ Spen in the Powerhouse and suddenly I’m back here again. C’mon! I couldn’t afford to miss this one with names like Guru’s Jazzmatazz, De La Soul, DJ Premier, King Brit, MJ Cole, Benji B, Sarah Devine, Jazzanova and all the usual Southport regulars that make Southport as great as it always is. I felt this could be a particularly conscious one due to the line-up and recent events in America.

It was good to see the venue looking so good. There had been a few grumbles from the last one due to the change to The Beat Bar, sound and general cleanliness. They got it right this time. The visuals and décor was sweet and the sound was booming and even the chalets had a makeover. From all the hype of the 20th year celebrations the expectations were back to normal and that’s no bad thing as this one was more for the lovers of this fantastic event who keep going back to experience the Southport magic and it’s no surprise that all the chalets sold out even in this difficult economic time. The music excellence is always held due to the regulars there like Norman Jay, Snowboy, Gilles Peterson, Simon Mansell, Bob Jones, Bob Jefferies, DJ Bigger, etc. The other exceptional artists that create the cutting edge element of Southport and the acts that have created the sounds of soul music never disappoint. I think it’s because people genuinely like playing Southport because of the vibe, the great party people and musical master class. It’s for the heads and the love.

It was amazing to think for me that straight away on Friday night I would witness Guru’s Jazzmatazz. Guru came on with all the joy of being back at Southport. A decade ago he was here in a smaller room in a different time. Ten years on it’s a homecoming for Guru and a joy to see progression. In a larger room and after all this time Guru is educating the crowd to the max with old classics and new tracks for the ‘Mix tape’. The musicianship is excellent and by the time Guru featuring Solar has finished The Funkbase is truly ignited and Southport 43 is on.

It’s always good to go to the Beat Bar on Fridays as Snowboy warms it up perfect. The Beat Bar playing jazz influenced styles of old and modern and plenty of progressive music as well always gets you vibing. Jose James was the live act for the night and King Brit and Dixon to close is showing new music as its best. Julie McKnight meanwhile was rocking the Powerhouse. The whole place was packed and when ‘Finally’ came on it was a real special moment in there and incidentally that track was heard a lot through the weekend. Great track! As you’d expect in the Connoisseur’s Corner soul music at its best with the legends in there with the appearances with Amir and Greg Wilson to make it even better.

One thing that I felt was missing from the last Weekenders was the great and talented jazz dancers that grace us from time to time. Thankfully the organisers got it sorted for this one by providing a new feature called ‘The Cotton Club’ providing the right environment for some serious dancing. Gloria Scott was meanwhile in The Funkbase to the pleasure of many fans on Saturday day.

Saturday night at the Funkbase and we’ve got some serious hip hop, funk and r’n’b due to the DJ’s in there like Ronnie Herel, DJ Serve, Steve Sutherland, Bigger and Dan Kelly. We even have the legendary De La Soul playing to a packed crowd who were definitely up for hearing their take on hip hop. A great gig! DJ Premier was to follow who playing up front hip hop was received a little luke warm at this time in the event. Premo clear about the situation got straight on the funk tip playing gems and mixed in his first class style. Definitely one for the heads and appreciators.

In the Beat Bar Jazzanova played to a packed room and kicked off with some serious grooves and a guest vocal performance from Ben Westbeech. I reckon Ben got the bug to come back from his great performance at Southport 40 and got to the chance to play some of his tunes and a new collaboration with Jazzanova. He rocked it and I’m sure will be a Southport regular!

Sara Devine was the main attraction for The Powerhouse on Saturday night. It was definitely a good gig with other great DJ’s such as Dennis Ferrer, Teddy Douglas and Karizma. And another great DJ Ashley Beadle in the Connoisseurs. Southport was working this weekend most definitely.

Southport continues on and some people miss out on the Sunday which always proves great. Marc Evans & The Muthafunkaz, Simon Mansell, Bob Jefferies, Terry Jones, Andy Davies, Mike Stephens and Bigger all to keep the party going and an after party for those not wanting to go home. It’s all good. I didn’t even mention the chalet activities that is a regular feature at the Weekender.

I really enjoyed this one! It seems they got certain problems sorted and the lovers of the event always come back as it is first class soul, funk and progressive music. You don’t hear bangers anywhere else quite like Southport. It was good to catch up with folk from previous visits. It’s a family at Southport. I didn’t however really get any strong vibe about the politics in America. There was no resounding or significant difference in the vibe to constitute that. Maybe it’s because it’s not about politics at Southport as it’s about one love and that’s all there is too it. Get your dancing shoes on and have a good time. That’s what it’s all about.